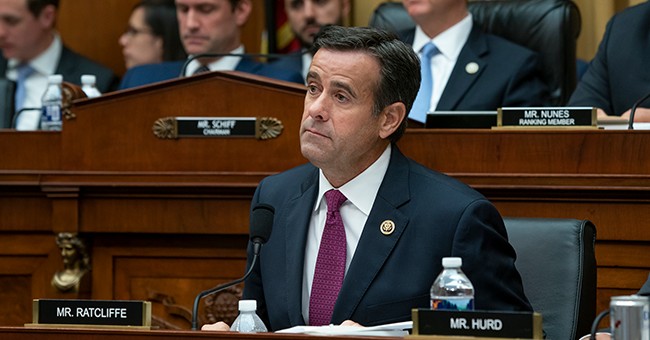 Like many of his colleagues, CNN's John King had a hard time hiding his bias against the White House on Monday. Trump wants Texas Republican Rep. John Ratcliffe to succeed his outgoing Director of National Intelligence Dan Coats, but critics are concerned by the nominee's lack of experience and his behavior at last week's Robert Mueller hearings. During those interrogations, Ratcliffe confronted Mueller about his final Russia report for leaving open ended the idea that Trump had obstructed justice. To Democrats and some in the media, that suggested Ratcliffe is a little too cozy with the White House and a little too in line with Trump's agenda.

"Which DOJ policy or principle sets forth a legal standard that an investigated person is not exonerated if their innocence from criminal conduct is not conclusively determined?" Ratcliffe demanded of the witness.

CNN's Chris Cillizza was suspicious of the timing of Trump's nomination, and shared the following take:

Trump isn't wrong that the ability to perform when the lights go up is of real value for anyone in such a prominent political position. The problem -- as has been demonstrated by his unprecedented Cabinet turnover -- is that he appears to put stock primarily in the performative aspects of the job, rather than balancing experience, readiness, temperament and the ability to actually do the job. Judging from Trump's picks as his first term has worn on, he prizes performance and personal loyalty above all else -- including qualifications.

Other outlets shared similar concerns. Vice News introduced Ratcliffe as the nominee "with not a lot of intelligence experience."

"It's not just his lack of experience," former presidential advisor David Gergen said of Ratcliffe on CNN during Monday's panel discussion. "It's the fact that he sees the world through an ideological lens."

Gergen worried that Ratcliffe, if confirmed, will "cherry pick" intelligence reports for the president.

Video: Partisan hackery on @CNN and the sort of thing that makes Stelter plus bosses Feist and Zucker happy - John King frets that Republicans won't "rise up against" @realDonaldTrump's pick of @RepRatcliffe to lead the DNI and instead "bite the tongue" pic.twitter.com/U3YKoVDIVN

Let’s be honest. It’s not because Ratcliffe is ideological. It’s because he has the wrong ideology.

John King agreed with his guest, even going so far as to hope that Republicans will do the righteous thing and push back against the nomination.

“We’ll see if Republicans rise up against the president on this one or whether they just bite their tongue,” King said.