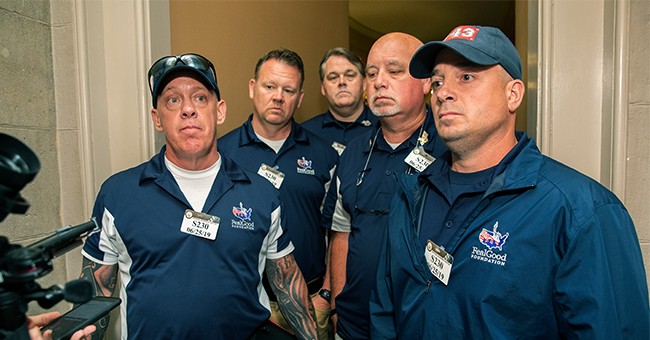 John Feal of The FealGood Foundation is angry. Congress was about to restore the 9/11 Victim Compensation Fund on Wednesday until Sens. Rand Paul (R-KY) and Mike Lee (R-UT) blocked the vote. The fund meets the medical needs of the first responders who jumped to action after the September 11, 2001 terror attacks. But, the conservative senators argued that they and their colleagues first need to address the cost.

Feal, one of those first responders who got injured at Ground Zero, called Paul out on Fox News, CNN, and any other outlet who would give him a microphone. And, I mean, he really railed off, even calling the GOP congressmen "a**holes" at one point.

"They're hypocrites at best, because— no, they're not only hypocrites, they're bottom-feeders, they're opportunists," 9/11 first responder John Feal says on CNN about Sens. Rand Paul & Mike Lee. "They should be begging for forgiveness for being assholes." pic.twitter.com/axeXLCXWcR

He "can't pick and choose" when he wants to be a fiscal conservative, Feal said of Sen. Paul. "Shame on him."

That was Jon Stewart's argument too. The comedian, who has fought for years to keep the 9/11 compensation fund in operation, was remarkably calm in response to the Republican senators' actions. But his message couldn't be louder. He accused Paul of "virtue signaling."

The senator responded to Stewart.

"In this case," Paul said of the comedian, "he’s not funny nor informed.”

Feal included some numbers in his argument, contrasting Paul's own medical bills when he was attacked by a neighbor with those of the 9/11 heroes.

The time to vote is now, Feal urged, because more and more first responders are passing away. Since last September, he said, 161 people have died.

Feal, though, has faith in Senate Majority Leader Mitch McConnell. After having several conversations with the leading Republican, Feal doesn't doubt McConnell's sincerity. The latter doesn't seem too concerned by the delay, telling press that the Senate will be voting again "shortly." Reports say he will try again next Wednesday.

Feal is confident the bill will pass, and "nobody's going to add any crap to it."