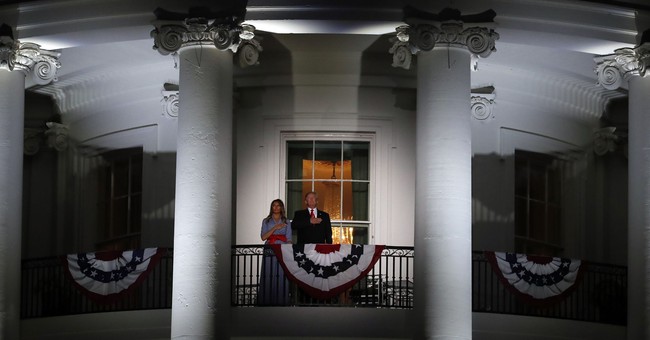 Democratic lawmakers are crying foul over President Trump's "Salute to America" Fourth of July celebration on Thursday. He's authorized the use of military tanks to be stationed in the nation's capital and will cap off the festivities with a speech at the Lincoln Memorial. Some of those military vehicles are getting a head start tonight, the U.S. Army warned D.C. residents. Democratic presidential candidate Julian Castro shared the sentiments of most of his party when he said the president's plan was a "waste of money" intended to maintain his ego.

The cost of our great Salute to America tomorrow will be very little compared to what it is worth. We own the planes, we have the pilots, the airport is right next door (Andrews), all we need is the fuel. We own the tanks and all. Fireworks are donated by two of the greats. Nice!

As upset as Democrats are over the president's patriotic plans, CNN said hold my beer. Chris Cillizza, for instance, is wondering whether the Trump presidency has devolved into a dictatorship.

The parading of military has long been the stuff of dictators and authoritarian regimes — from Iran to North Korea to Russia. The leaders — military and civilian — in the United States have avoided that sort of thing because, well, the strongest guy in the gym doesn’t need to go around telling everyone how strong he is. It’s understood. Yes, we have massive military might. But we also believe in diplomacy, avoiding military conflicts at all costs and using force as only a last resort.

Trump doesn’t seem to grasp that nuance. Or he grasps it and either doesn’t care or doesn’t agree.

The network noted how curious it is that Trump is dishing out VIP tickets to his inner circle.

President Trump's political allies received some of the VIP tickets to this week's July 4 spectacle on the National Mall, according to people familiar with the event https://t.co/5U81lsLzsM

Former White House Press Secretary Ari Fleischer noted that, while he's not a fan of it, this was a common occurrence under Democratic presidents too.

"I don’t care for the fact that the RNC is distributing some tickets, but the DNC did the same for WH events under Clinton and Obama," he wrote on Twitter. "The media didn’t seem to care then."

He also implored CNN to get a clue.

I watched CNN this morning deride the July 4th military display. They interviewed a D Congressman who dismissed it as Trump being “vain glorious”. I don’t think CNN or the Ds realize how they’re coming across as anti-military. Their hatred for Trump overwhelms them.