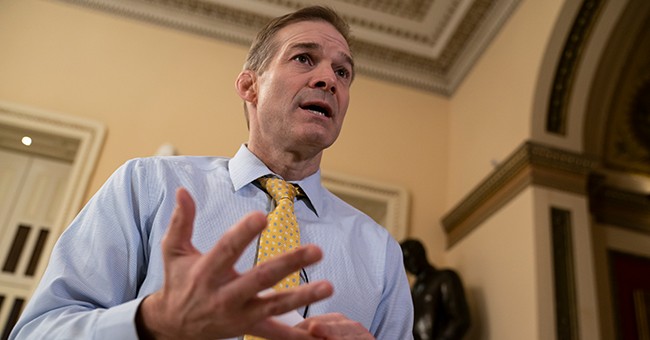 John Dean, former White House counsel to Richard Nixon, was the star witness at Monday's House Judiciary Committee hearing about Robert Mueller's Russia probe. But to many people, including Rep. Jim Jordan (R-OH), Dean's appearance was a farce. It's obvious Democrats just want to hear him compare the Russia investigation and President Trump's behavior to Watergate and President Nixon.

Democrats, presumably, also like Dean because he's not a fan of the president. Jordan pointed out that fact by reading some of the unflattering things he's had to say about him.

“We are witnessing Trump’s massive cover-up of his criminal behavior," Dean reportedly wrote on May 22. "As POTUS he is incapable of accomplishing anything.”

Jordan was confused by Dean's assessment because he could list several Trump accomplishments for the witness.

"When you wrote that what did you have in mind?" Jordan wondered. "Were you thinking about 3.2 percent economic growth rate we had the last quarter? Thinking about the fact we got the lowest unemployment in 50 years? How about the fact the hostages are back from North Korea?"

For good measure, the Republican added how the U.S. embassy in Israel finally moved to Jerusalem.

Jordan waited for an answer, but Dean explained that "parliamentary rules" prevented him from giving the congressman a "full answer." The room erupted in laughter.

Monday's Judiciary Committee hearing also gave us this tense moment between Rep. Matt Gaetz (R-FL) and Dean, in which the Republican grilled him about the paychecks he gets from CNN to make outrageous accusations.

Gaetz: “How much money do you make from CNN?”

White House Press Secretary Sarah Huckabee Sanders agreed that Dean was a stunt witness on Fox News Tuesday morning and she urged Democrats to "move on" from Russia and start working with the president.