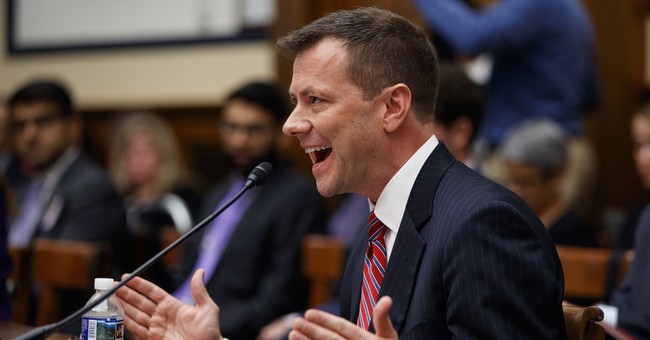 Last week we reported on filmmaker Phelim McAleer's new play about former FBI agent Peter Strzok and his string of anti-Trump texts with his lover, FBI lawyer Lisa Page. McAleer gave the cast of "FBI LoveBirds: UnderCovers" a simple prompt: read the texts and the transcript of their behind-closed-doors congressional testimony verbatim. Strzok and Page's controversial correspondence included some pretty incendiary thoughts about Trump and his supporters and exposed the bias at the agency. It was especially controversial because Strzok had been a part of both the Hillary Clinton email investigations and special counsel Robert Mueller's Russia probe. Clearly an intriguing opportunity for the theater. The producers even nabbed "Superman" Dean Cain to play and Strzok and "Buffy the Vampire Slayer" Kristy Swanson to portray Page.

Still, with tensions so high in Washington right now over Mueller and Russian collusion, the actors have been reporting death threats and the planned venue, D.C.'s Mead Theater, is canceling the project due to those "threats of violence."

McAleer and the producers sounded off on the theater's broken contract and believe the cancellation was borne of a different motive.

"We are appalled," McAleer said in a statement. "The Mead Theater withdrew the event, citing 'threats of violence.' In actuality, this is an attempt to squash the content of FBI Lovebirds: UnderCovers and what it reveals about the anti-Trump forces in the government. They knew we are filming the play and planning to release it online. That's why they banned us. They just don't want the truth out there."

McAleer also mused a bit on his Twitter page, using the words "cowardly" and "sabotage" to describe the theater's action.

The decision by the Mead Theater to cancel our booking for the #FBILovebirds play is cowardly. Please help us get the word out and continue to support us at https://t.co/mo6y8RFrTK. We are not going to give in to their attempt to sabotage us. pic.twitter.com/CdRGPzIcJ4

Despite the setback, McAleer said the show will go on, as planned, on June 13. Once they do find a new venue, "FBI LoveBirds" will be filmed and released online. The project is being financed via crowdfunding and is nearly halfway to its $95,000 goal.