Gene Simmons Delivers a Surprising, Yet Powerful Message at the Pentagon 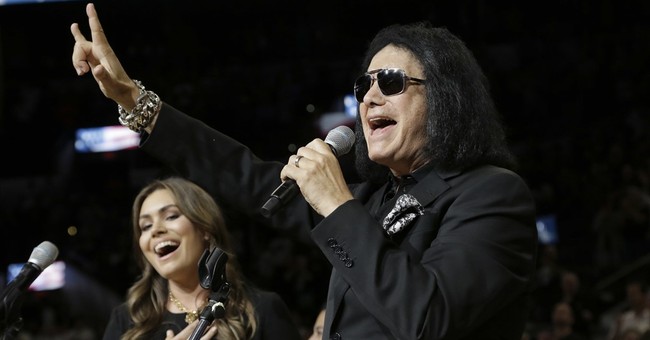 Gene Simmons, the lead singer of the iconic rock band KISS, made a surprise appearance at the Pentagon on Thursday to share his appreciation for the military and to share a rather personal story.

@genesimmons graciously came to the Pentagon press room today to shake hands and say thank you to troops. He spoke about the values his mother instilled in him about America. So in the last year, the leader of @KISSOnline and @GerardButler.....who else should show up soon...... pic.twitter.com/pmU4562Wad

After greeting service men and women, Simmons, an Israeli-born musician, choked up speaking about his late mother, who was placed in a Nazi concentration camp at the age of 14. He said when he was just a boy, his mom would always cry any time she saw the American flag. He didn't understand it as an 8-year-old, but he feels the impact now.

Instead of a more “rock on”-type vibe, Simmons choked back tears as he told the room how his mother was 14 when she was put in a Nazi concentration camp, survived, gave birth to him in Israel and came to America.

"I may have been born in the country that people throughout history have referred to as the Promised Land, but take my word for it, America is the Promised Land for everybody," Simmons said. "Don’t be ashamed, don’t hesitate. We need to teach young people to be comfortable saying God Bless America.”

Simmons returned to his birth country back in 2011, where he insisted that anyone who shuns or boycotts Israel is an "idiot."

"As an American, there’s no choice but to be supportive of Israel,” the rocker said.