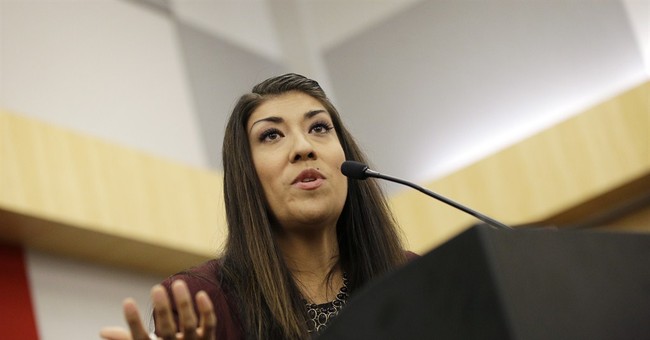 Former Vice President Joe Biden has said a lot of things about his oftentimes overly friendly interactions with men and women, but two words have been glaringly absent: "I'm sorry." His first accuser, Lucy Flores, says the VP inappropriately touched her and smelled her hair while she was running for lieutenant governor of Nevada.

He put out a statement, followed by a video statement, explaining that making people uncomfortable was "never his intention."

Then came his appearance Friday at the International Brotherhood of Electrical Workers Conference. At one point, he brought a young boy on stage, put his arms around him, and made a joke about it.

"He gave me permission to touch him all right?” Biden said. “Everyone knows I like kids better than people.”

Flores was among the hordes of people wondering what Biden was thinking.

It’s clear @JoeBiden hasn’t reflected at all on how his inappropriate and unsolicited touching made women feel uncomfortable. To make light of something as serious as consent degrades the conversation women everywhere are courageously trying to have.

Biden's awkwardness with women is no secret. Just browse Biden memes on Twitter and you'll find several shots of him these past several years cozying a little too close to Obama administration officials' wives, Congress members' daughters, etc. But, he says he means no harm. It's just his personality. Since Flores became the first woman to publish an official complaint about his behavior, however, it's now become a real problem. A few other women followed in her footsteps, sharing their own personal stories about how the former VP violated their personal space.

President Trump has even weighed in on the scandal, sharing a doctored video of Biden creeping up behind himself.

The former VP reprimanded Trump for acting less-than-presidential, but Trump said "people got a kick out of it."