Mark Meadows Explains Why It's 'Rich' Dems Are Threatening Subpoenas 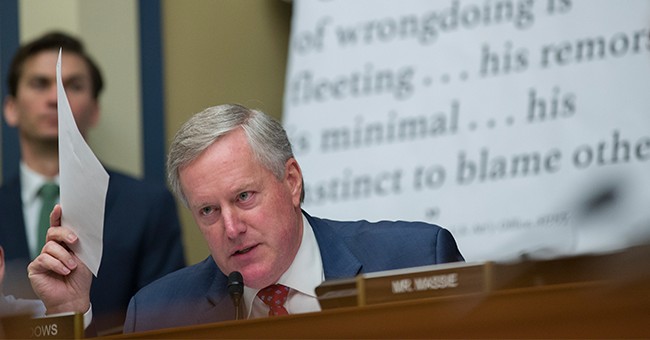 Attorney General William Barr has released a summary of special counsel Robert Mueller's Russian collusion report, which was sans collusion. Mueller had already noted on Friday that he would not be pursuing anymore indictments. But, some Democrats and media outlets are suggesting President Trump isn't in the clear just yet. Rep. Pramila Jayapal (D-WA) is one of several lawmakers suggesting it's "disingenuous" to say the report proves there was no collusion.

"We need to look at everything - not just the summary conclusions but everything underneath," the progressive caucus member explained on CNN's "State of the Union" on Sunday.

That type of thinking is incredibly exhausting to Republicans like Rep. Mark Meadows (R-NC).

"They were talking about a special prosecutor before James Comey was fired," the congressman recalled on CNN. "And yet here we are today, some 22 months later, talking about something about spending tens of millions of dollars on a narrative that Democrats put forth. They said this president colluded with Russians. In fact, some even went as far to say that he was an agent of Russia, which is just ludicrous. And yet here we are today, trying to make sense of an investigation that happened 22 months into it. We need to go after the bad guys, which is Russia and not the president of the United States.”

Dana Bash noted that some Democrats, including high profile ones like Rep. Adam Schiff, chairman of the House Intelligence Committee, have already threatened to use their subpoena powers if they don't get Mueller's full, unredacted findings. Meadows says that's "rich."

Despite no evidence of collusion, Democrats have led investigations into other aspects of Trump world in what Meadows calls "a pattern of harassment."

"And yet we see that this is just a large dragnet, trying to find something to investigate," he said. "You need to look at the crime and investigate the crime, not go out and use the power of the government to dredge up some kind of wrongdoing."

"I have been consistent, saying this president didn't collude," Meadows said. "And now it appears that the facts will support that."

Rep. Jim Jordan (R-OH) echoed Meadows in an interview on ABC's "This Week."

"We’ve got to read the report, but what I do know is to date not one bit of evidence to show any type of coordination, collusion, conspiracy between the Trump campaign and Russia to influence the election."