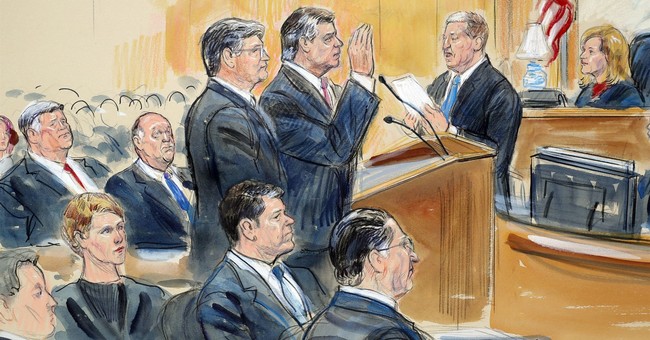 BREAKING: Judge Jackson sentences Paul Manafort to 73 months in prison, some of which will run *concurrent* to the sentence handed down last week.

Before the ruling, Manafort said he was "sorry" and pleaded with Judge Amy Berman Jackson to think of his family as she considers what sentence to hand him for his tax and bank fraud charges, and foreign lobbying violations. These crimes were discovered during special counsel Robert Mueller's Russian collusion investigation, but they pre-date the 2016 presidential election. Jackson emphasized that this case was not about collusion. It was not present in this case, "period," she said.

"In my previous elocution, I told Judge Ellis that I was ashamed at my conduct that brought me into his court, and for that, I said I took responsibility," Manafort said. "Apparently I was not as clear at saying what was in my heart so for you I say to you now that I am sorry for what I have done."

Manafort already received 47 months in Virginia court last week. His attorneys had argued for a lighter sentence due to their client's age and failing health. He entered the courtroom in a wheelchair.

"Please let my wife and I be together,"  he added on Wednesday. "Please don't take away any longer than the 47 months. She needs me and I need her."

While addressing the court, Judge Jackson declared that Manafort "is not public enemy No. 1," nor is he a violent criminal. But, she added that he has committed significant crimes, which means he is also "not a victim."

"Saying 'I'm sorry I got caught,' is not an inspiring plea for leniency," she added.