Critics Used This Photo to Try and Prove the Trumps Were in an Unhappy Marriage...But They Missed the Context 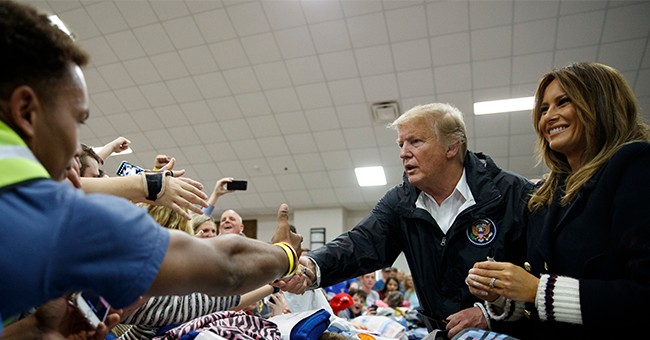 President Trump and first lady Melania Trump traveled to Alabama last week in the wake of a series of deadly tornadoes. They toured the devastation and offered what comfort they could to those affected. The natural disaster killed 23 people and destroyed homes for miles. Per usual, however, the media misinterpreted some photos that were produced from the trip.

In one particular picture, the president and Mrs. Trump are looking at something on the ground with pained faces. So, author Molly Jong-Fast, who contributes to The Bulwark, amused herself by joking that the two are in "martial bliss."

That's when Donald Trump Jr. reminded the critics that of course they look glum. They are touring a storm-ravaged community. In the supposed "martial bliss" photo that Jong-Fast mocked, they are paying respects at a gravesite.

??FAKE NEWS IS SICK SCROLL THROUGH ?? This is how fake news is made. The President and Melania were paying respects to fellow Americans killed in a tragedy in Alabama. This deranged “journalist” (aka left-wing activist) used this solemn moment as an opportunity to dunk on the president and his marriage. Made worse - she works for the “conservative” site The Bulwark - which is simply a site where out-of-work liberals play ‘conservatives’ to please their leftist masters. The Left is sick. They will lie. They will warp truth. Anything to hurt Trump. Anything. Don’t believe them. #Repost @bennyajohnson ···

The Trumps' trip to Alabama also resurrected another "scandal" that some folks have found reason to peddle. The ladies of "The View" spent some time on Monday analyzing the "fake Melania" conspiracy in which theorists suggest that wasn't really the first lady by Trump's side this weekend.

"Some people believe Melania is using an imposter to stand in for her," Joy Behar explained. "You mean there are two women who have to pretend they're listening to him?"

After showing several photos of Melania from different angles and zooming in on her face, Behar and a co-host went along with the conspiracy.

FAKE MELANIA CONSPIRACIES RETURN: The internet is buzzing again with theories that first lady Melania Trump is using an imposter to stand in for her — the co-hosts investigate. https://t.co/f8u2wc159S pic.twitter.com/XNYBT9U6S8

"That doesn't look like her!" Behar exclaimed about one photo. Sunny Hostin, who was "ashamed" to admit she spent an hour analyzing the photos over the weekend, had to acknowledge that something wasn't right. While Melania is a tall, statuesque woman, some of the photos in the album pictured a "shorter" woman, Hostin observed. She went on to note that the rumor started because one of her Secret Service agents looks like her.

"There's an element of truth to the idea that she doesn't want to spend time with him," Behar joked.

You better believe Mrs. Trump's spokeswoman had something to say about all this.