Jon Stewart Sounds Off on Capitol Hill: It's 'Bulls***' We Have to Drag 9/11 First Responders Here 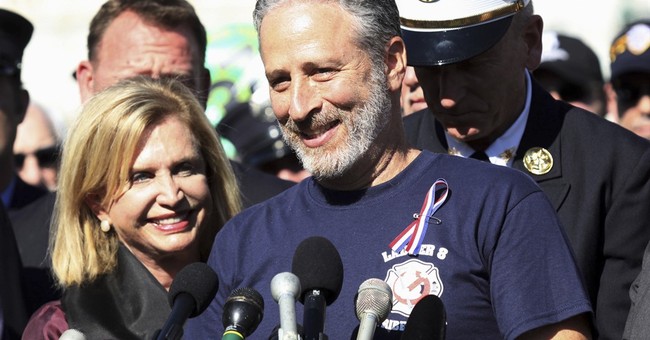 Comedian Jon Stewart said that it's "bulls***" he, his friends in Congress, and the first responders who are still suffering from conditions they contracted since their heroics on September 11 have to come down to Capitol Hill again to ensure the September 11th Victim Compensation Fund gets fully funded.

"There’s no reason to have to drag these people down here," Stewart said. "It’s bulls***. You know it and I know it."

The lawmakers standing behind him agreed, but weren't quite as blunt as the comedian.

"This is a moral obligation," Senate Minority Leader Chuck Schumer said. "It is what America is all about."

Schumer emotionally recalled the day of the terror attacks. The first responders' bravery, he said, was "incredible."

"We shouldn’t have to be here, that’s all," he regretted. "But we will be here until we fully fund for the Victims Compensation Fund."

Sen. Cory Gardner (R-CO), leading the Republican charge on the effort to permanently fund the compensation fund, said he was standing alongside the Democratic leaders because "this is not just a New York event."

This, he said, "is an American event." It is "a sea to shining sea obligation."

Over 100 Coloradans were there that day, going into the buildings, seeking those who needed aid.

"We shouldn’t turn these people into people who just shake the couch for change," Gardner noted. We need to  fund the compensation effort "for a lifetime."

Rep. Peter King (R-NY) agreed and explained this is not a budget issue or a spending issue. "It’s a human issue."

Over 150 people in his district have died and others are struggling from disease, he shared.

"These are real human beings and their families are suffering."

They are nearly there, Stewart noted. All it takes is "12 Republicans on the Senate side and this thing gets through."

While they are hoping to extend the fund, Stewart commended the Trump administration for their handling of the current fund.

Jon Stewart calls for reauthorization of 9/11 Victim Compensation Fund Act: "The Trump Justice Dept. is doing an excellent job administrating this program ... the program works exactly like it's supposed to, so now it's Congress' job to fund it properly" https://t.co/QeLtpLNjfu pic.twitter.com/J5vHdYx0og

"The Trump Justice Department is doing an excellent job at administering the September 11th Victim Compensation Fund," he said.

Stewart tapped the microphone to make sure the press heard him.

Stewart "begged" the media to talk to the first responders instead ambushing him and the lawmakers for quotes following the press conference.

"Stop and talk to the men and women who are sick and suffering so that you understand that these are human beings," he suggested. "You can amplify their stories. Trust me, if the American people had any sense that these shenanigans are going on, they would be outraged."