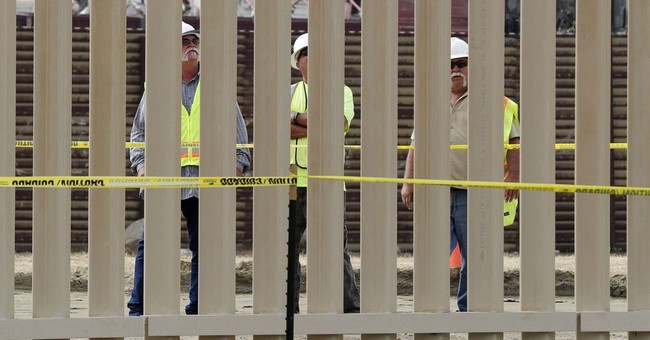 The 9th Circuit Court of Appeals has given President Trump their blessing to proceed with his border wall prototypes along the U.S.-Mexico border. The plaintiffs, comprised of several environmental groups, challenged the Department of Homeland Security's supposed authority to waive environmental and public participation laws to speed their border construction projects. The 9th circuit reaffirmed a ruling by a district court judge in California that DHS did have authority to streamline the building of these sections of the wall.

New: Another win for DHS in court in the effort to speed up building sections of border wall (the opinion calls them "border barriers") — the 9th Circuit ruled for the govt in a challenge brought by California and enviro groups to expedited construction https://t.co/o6hfMSzOzD pic.twitter.com/lwuHnywHVA

The DHS's authority comes under the Immigration Reform and Immigrant Responsibility Act of 1996, the court explained. Their decision was received well by the Trump administration.

“Today the court has affirmed that authority, and that is a victory for the Trump administration, for the rule of law, and above all, for our border security,” Justice Department spokesman Steven Stafford told The Hill.

Environmentalists, however, say they have now even more reason to be concerned about the surrounding ecosystems.

“Congress has ceded its authority to Trump, who has swept aside fundamental public safety and environmental laws to build walls that won’t work,” Brian Segee, a Center for Biological Diversity attorney, said after Monday's ruling. “This lawlessness is destroying irreplaceable ecosystems and militarizing communities.”

The 9th circuit is not always so kind to Trump's agenda. In fact, the court has often been a source of derision for 45. He railed against the court, for instance, when it blocked his ban on asylum for migrants entering the U.S. illegally in November.

"You go to the Ninth Circuit and it's a disgrace, and I'm going to put in a major complaint," Trump said at the time.

Trump plans on doing something about it. He recently released a list of judicial nominees, with a few names for the 9th circuit.

How Did This Ever Get Published? NYT Video Takes a Blowtorch to Blue States
Townhall
Trouble in Socialist-Ville? David Hogg tweets entire thread SHAMING progressives for their lack of self-awareness and ROFL
Twitchy
Dr. Fauci's Comments on New COVID-19 Variant and the Origins of the Virus Give the Game Away
Redstate
Whose Land Did Native Americans Steal Before Europeans Stole It From Them?
PJ Media