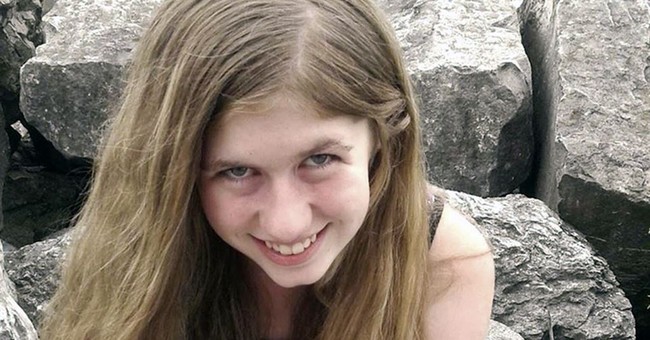 "Today we can finally say, Jayme Closs is home," a joyful Justin Tolomeo, special agent in charge of Milwaukee division of the FBI, said Friday at a press conference in Barron, Wisconsin.

Closs, just 13 years old, had been missing for three months following her parents' murder. Her parents were found fatally shot in their home in Barron on Oct. 15 and it was apparent Jayme had been abducted. On Thursday, a miracle happened. She had been found alive.

As Douglas County Sheriff Chris Fitzgerald explained it, a woman named Jeanne Nutter was walking her dog in a town about an hour away from Barron on Thursday afternoon, when she was approached by a girl claiming to be Jayme. Fitzgerald's deputies responded and confirmed her identy. Then, a patrol sergeant found a vehicle that matched the description Jayme provided and took him into custody. They identified him as 21-year-old Jake Thomas Patterson. He had "zero criminal history" in the state of Wisconsin, the sheriff noted.

Closs had managed to escape from the home of the suspect. It's "unthinkable" and it just "shows her will to survive," Fitzgerald marveled.

The sheriff joyfully recalled the moment he heard Closs was alive.

"My legs started to shake," he said, with a big grin. "It was awesome."

"We want to thank Jayme for being so courageous and for finding her way back to us," she continued, through tears. "What an extraordinary young lady."

“Jayme we missed you, and we are so grateful you are home," Tremblay said, speaking for the whole community.