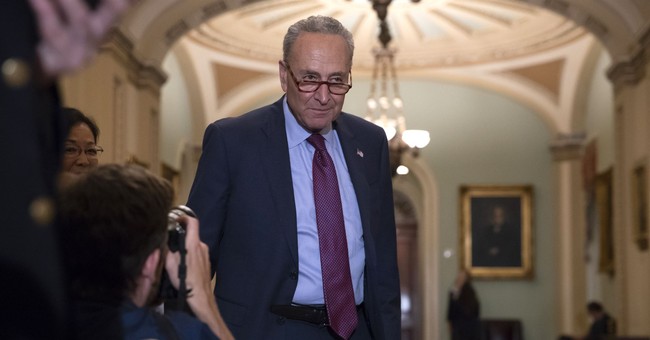 Border security isn't the only thing on President Trump's agenda that Democratic leader Chuck Schumer intends to interrupt. Democrats vowed to “reject any end-of-the-year deal on judicial nominations, signaling they’ll toe a tougher line on court appointments amid heavy pressure from the left.” And so far they are living up to the pledge. The president shared his frustrations Tuesday on Twitter.

For FAR TOO LONG Senate Democrats have been Obstructing more than 350 Nominations. These great Americans left their jobs to serve our Country, but can’t because Dems are blocking them, some for two years-historic record. Passed committees, but Schumer putting them on hold. Bad!

At this snail's pace, there remain more than twice as many vacancies as there were under Presidents Bill Clinton or George W. Bush. Radio host Hugh Hewitt predicts that the process is nowhere near a conclusion because Democrats have these congressional tricks at their disposal.

Now: at least 12 federal appeals court nominees and 56 federal district court nominees awaiting hearings and/or votes. Democrats can slow each one down by 60 hours of useless floor time. (No one talks, but @chuckschumer refuses unanimous consent to proceed). So @SenateGOP: Move 1

As Ed Feulner of the Heritage Foundation notes, this practice can't possibly be just about the nominees.

This isn’t about judges, of course. These foot-dragging politicians aren’t failing to do their duty because the nominees aren’t qualified. The main thing wrong with them, as far as Sen. Chuck Schumer, New York Democrat, and his colleagues are concerned, is who nominated them. Politics, plain and simple, is throwing sand in the gears of the federal bench.

Schumer's obstruction goes all the way to the highest court. Remember in July how he pledged to stop Brett Kavanaugh's nomination to the Supreme Court before he even met him? Unfortunately for Democrats, Kavanaugh was the second conservative justice Trump managed to get confirmed to the Supreme Court, after Neil Gorsuch. Some predict he'll get a third this year.

Despite all the Senate hurdles from Democrats, Trump has set a record for the number of appeals judges confirmed during a president’s first two years.