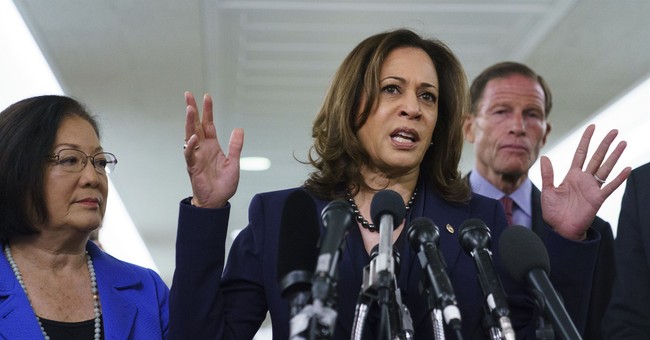 Larry Wallace served as the director of the Division of Law Enforcement under then-Attorney General Kamala Harris in the California Department of Justice in 2016. He stayed on as her aide once she was elected senator. However, he was forced to resign in disgrace this week after reports came to light that his former executive assistant Danielle Hartley sued him for "gender harassment." Here's just a glimpse of what Hartley charged in her lawsuit.

According to the lawsuit, Wallace placed his printer on the floor underneath his desk and ordered Hartley to replace the paper or ink on a daily basis. When she asked to move the printer to another location so she would not have to crawl under his desk in dresses and skirts, the lawsuit states, Wallace refused. Wallace frequently asked Hartley to put paper in the printer while he was sitting at his desk or in front of other male executives from the division, according to the lawsuit. (Sacramento Bee)

Hartley also recalled how Wallace took away "meaningful tasks" from her and instead asked her to run errands for him, including washing his car. Her supervisor and her coworkers were unhelpful. It all took a toll on her mind and body, resulting in panic attacks, depression, and even surgery for a pinched nerve in her arm.

The suit was filed in December 2016 and settled in May 2017 for $400,000. California attorney general Xavier Becerra, who replaced Harris after she won her Senate race, presided over the settlement. Harris apparently had no idea about any of it, but has accepted Wallace's resignation.

“We were unaware of this issue and take accusations of harassment extremely seriously," Harris spokeswoman Lily Adams wrote in an email. "This evening, Mr. Wallace offered his resignation to the senator and she accepted it.”

The Department of Justice also denied "generally and specifically" all of the allegations listed in Hartley's lawsuit.