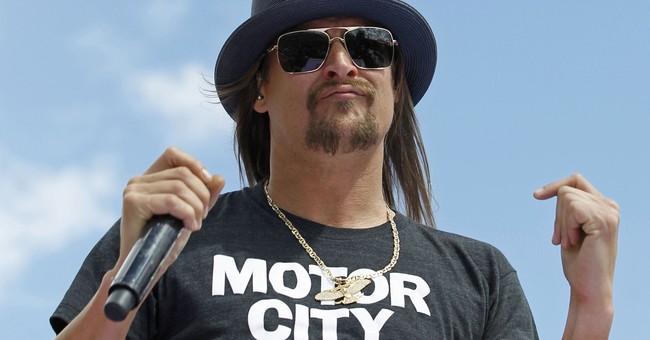 Rock star Kid Rock needed a bit of a filter on his early morning appearance on "Fox & Friends" Friday, when the rocker's Big Ass Honky Tonk Rock & Roll Steakhouse (its real name) hosted the show from Nashville. Steve Doocy joined the rocker and the two enjoyed a bit of friendly small talk, but it wasn't long before the host had some apologizing to do as Rock started sounding off on PC culture.

Doocy first praised Rock for his patriotism and asked if he would ever be interested in running for higher office. Rock laughed off the latter and explained why he's best "on the sidelines."

Kid Rock on possibly running for office: "Oh, I bet if I have enough to drink one night I'll think about it again... I think I'm best served on the sideline being a cheerleader for our troops and our veterans, and you know, maybe just trying to pay my taxes." ?? pic.twitter.com/0MfCjqfvgd

But, the rocker had much more to say, particularly about the country's state of political correctness.

"God forbid you say something a little bit wrong," and you get called racist, homophobic, or worse, he said.

Rock said everyone deserves love, minus one person in particular. (warning: language)

"People need to calm down, get a little less politically correct, and I would say love everybody - except, I'd say screw that Joy Behar b****."

"No, no, no, no," Doocy interrupted. "You cannot say that. We apologize for that."

"I mean lady," Rock corrected himself.

Doocy again apologized and suggested to Rock that "she just has a different point of view than you do."

Doocy's co-host Ainsley Earhardt also assured viewers that Fox does not condone that language and that they don't share his feelings about Behar.

Rock said he was joking, although not about the sentiment, and suggested that perhaps he and Behar could "hash it out" on "The View."