More on that Walkout at Marjory Stoneman Douglas 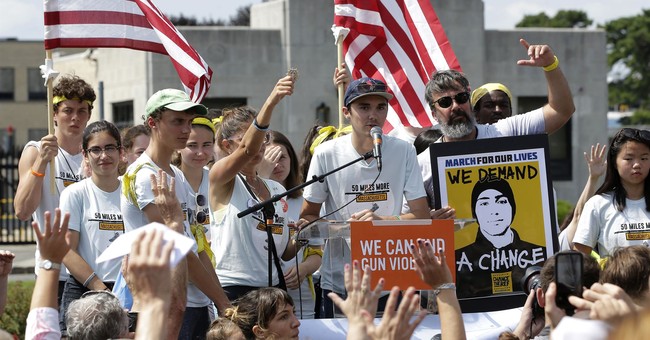 Faculty and students at Marjory Stoneman Douglas High School held a walk out Tuesday to demand four officials be reinstated. The Public Safety Commission reassigned three assistant principals and a security specialist this week after an investigation found that those officials did not take proper action in the lead up to the shooting rampage. The 20-year-old gunman, a former student at the school, killed 17 people last Valentine's Day. The commission's full report will be released in January.

Lisa Maxwell, executive director of the Broward Principals and Assistants Association, called the reassignments "unconscionable" and "beyond despicable." All those officials did was to try to save kids, she argues. Her group plans to sue to reverse the school district's action.

Others upset with the reassignments participated in yesterday's walkout.

Gregg Pittman, the U.S. history teacher who organized the protest, says removing essential staff in the middle of the school year disrupts school operations and hurts the healing process. pic.twitter.com/V3dQNAoO4g

Upset about the reassignment of incompetent faculty members who had prior warning of 181958? Too bad. GROW UP for the innocent students who paid the price for faculty incompetence that never will be able to.

Kashuv doesn't have time to respond to every outraged teacher. He's too busy trying to convince the White House to award the Presidential Medal of Freedom to Peter Wang, the Junior ROTC student who died trying to save students. He was 15 years old.

Please join me in asking @POTUS to Award the Presidential Medal of Freedom to Parkland Shooting HERO and victim, Peter Wang, who died saving others https://t.co/YDDcXfzqfy