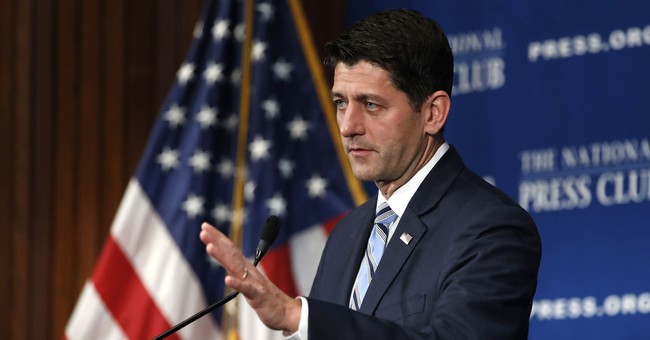 House Speaker Paul Ryan, who plans to retire from Congress at the end of his current term, chimed in on the birthright citizenship debate this week. President Trump wished he hadn't. The president suggested on Monday that he had the power to end birthright citizenship, the process of giving U.S. citizenship to anyone born in the States, regardless of whether their parents are illegal immigrants, via executive order.

"We're the only country in the world where a person comes in and has a baby, and the baby is essentially a citizen of the United States," Trump said in an interview with Axios. "It's ridiculous. It's ridiculous. And it has to end."

Birthright citizenship will end "one way or the other," the president promised.

“You cannot end birthright citizenship with an executive order," Ryan said Tuesday. "As a conservative, I’m a believer in following the plain text of the Constitution, and I think in this case the 14th Amendment is pretty clear, and that would involve a very, very lengthy constitutional process. But where we obviously totally agree with the president is getting at the root issue here, which is unchecked illegal immigration.”

Trump used Twitter to respond to the speaker and offered what he thought were better suggestions as to how he could do his job.

Paul Ryan should be focusing on holding the Majority rather than giving his opinions on Birthright Citizenship, something he knows nothing about! Our new Republican Majority will work on this, Closing the Immigration Loopholes and Securing our Border!

Trump argued in an earlier tweet that birthright citizenship is not covered by the 14th Amendment "because of the words 'subject to the jurisdiction thereof.'"