Despite Prompting, Tree of Life Rabbi Refuses to Blame Trump for Tragedy 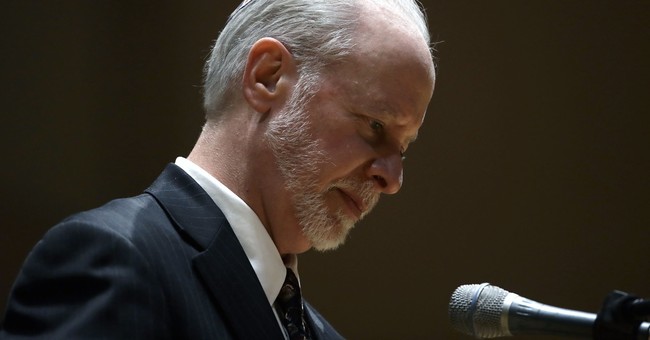 Tree of Life Synagogue Rabbi Jeffrey Myers had just started his sermon on Saturday when an anti-Semitic madman burst in and started shooting. He killed 11 people, and injured a handful of others, becoming the author of the deadliest attack on Jews in U.S. history.

Rabbi Myers is being hailed as a hero for his efforts to shield his congregants for the gunfire. But, understandably, he is focused on those he couldn't save.

"I could only save some," he said in an interview with CBS. "The people in the back of the sanctuary I could not save."

Myers said he will carry that regret the rest of his life. It's his "burden to carry."

Prosecutors are seeking the death penalty for the murderer. But some critics want President Trump to admit accountability for the carnage too. Critics matter-of-factly say that Trump's rhetoric influenced the anti-Semite's shooting spree. Members of the progressive Jewish group Bend the Arc told the president he's not welcome in Pittsburgh until he condemns white nationalism.

CNN anchor Alisyn Camerota perhaps expected to hear more of the same from Myers. She asked the rabbi on her program if he blames Trump for the tragedy, but he didn't take the bait. Quite the contrary.

"The president of the United States is always welcome," Myers told Camerota. "I'm a citizen. He's my president. He is certainly welcome."

Tammy Hepps is one of the 18,000 people who signed Bend the Arc's letter to Trump demanding he renounce white nationalism before he steps foot in Pittsburgh. She said she "respects" Rabbi Myers, but she feels that "the blood of these victims is on Trump’s hands," adding that Trump has for years used rhetoric to "endanger" their community.

Trump, we must note, has spoken out about the tragedy.

But, just this morning, Trump again referred to the media as the real culprits. They are "fake news" and the "enemy of the people," he charged.

Myers seems intent not to let the divisive rhetoric distract him from his new goal: rebuilding his home.

"The bullet holes are too numerous to count, but we will rebuild because we're Tree of Life. We've been here 154 years and you can cut off some branches, but the tree will continue to grow, and we will be back."

"I will not let hate close my building," Myers declared.