Caravan Forced Back at Mexican Border 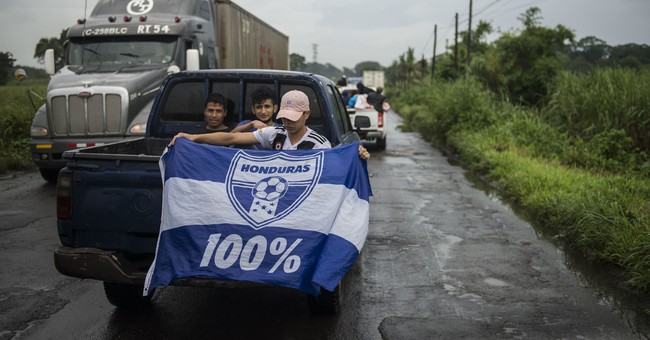 BREAKING: Migrants in caravan tear down border gate in Guatemala, rush toward border bridge into Mexico.

The much talked about caravan of Central American migrants has been forced to turn around at the Mexico-Guatemala border.

They stopped about two blocks from the crossing before heading back, saying they would wait another hour or so. Some of them talked among themselves.

The border post is guarded by a heavy security force and tall metal gates. Dozens of Mexican federal police officers are on the border bridge, with hundreds more behind them.

Guatemala has closed its border gate and is standing guard with dozens of troops and two armored jeeps.

Mexico's ambassador to Guatemala says his country has decided to enforce a policy of "metered entry" since thousands of migrants are clamoring to cross.

The migrants hope to enter Mexico and cross the country to reach the United States.

About 4,000 migrants have reportedly fled Central America to escape poverty and violence. Before the caravan reached the border, President Trump warned the immigrants that he would send the military to intervene. In a speech Thursday night, Trump accused the Democrats of paving the way for the caravan with their sanctuary city policies. He also suggested they are ready to welcome the migrants with open arms because they are likely to vote for them in elections.

When confronted by reporters en route to the border, many migrants have said they are hoping to reach the U.S. to find work.