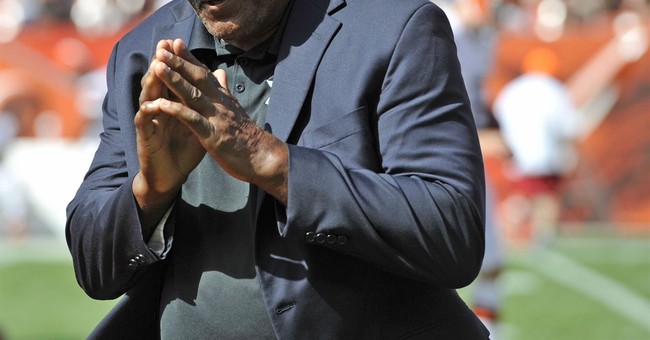 NFL Hall of Famer Jim Brown was another guest of President Trump's in that entertaining Oval Office meeting with Kanye West last week. The two men are, of course, getting flak for cozying up to the president. The hate against Kanye has been especially vile, with critics questioning his mental health, calling him a "token negro," starring in a "minstrel show, " and other offensive terms.

Still, neither West nor Brown has regrets.

"We had the opportunity to meet with the President of the United States which everybody doesn't have that privilege," Brown explained. "With me, at 82 years old, the only thing I could talk about was how to help other people. So, it was very positive."

Reporters outside the White House last week wanted to know if Brown had spoken up specifically about the African-American community while he had President Trump's ear. Again, the former football star promoted unity.

“I gave him my opinion of the overall community in this country. I’m a black man, of course. But my life has not always been around black people. I have some wonderful white people that have helped me as a child, helped me as an adult. Made up for the fact that I did not have a father. So I expressed my desire to bring a plan, along with his plan, on how to help people. People need jobs, people need education. People need to be attended to. So that’s what I’m talking about. It’s not controversial, I’m sorry.”

Brown also doubled down on the NFL's national anthem controversy. When the press asked, he offered his "very blunt" opinion on the protests.

“I can be very blunt about taking a knee. See, first of all, I’m an American. That flag is my flag. The things that I’ve overcome in this country have allowed me to make me a better person. I don’t think we should take knees in protest instead of standing up for our flag. I think we should work out our problems as a family. And that’s what I would advocate to my children and to all the young people that I deal with. I am an American, that flag is my flag, and I want to represent it that way.”

That is not the message Colin Kaepernick wanted to send. The former 49ers quarterback started the kneeling trend as a way to speak out against police brutality. He also wore socks depicting cops as pigs, apparel he defended by noting that the cartoon represented "rogue cops." The explanations didn't matter. He quickly lost fans and started to get booed at games because his behavior was seen as disrespectful to American veterans' sacrifices.

But, West and Brown are now the enemies for simply sitting down and talking to the president.