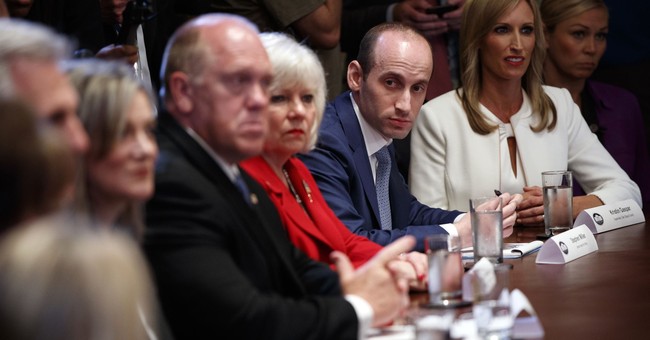 White House senior political adviser Stephen Miller's third grade teacher is out with a new op-ed criticizing him for his adolescent behavior. While a student at Santa Monica's Franklin Elementary school, Miller was a loner and ate glue, his former teacher Nikki Fiske regretted.

Do you remember that character in Peanuts, the one called Pig Pen, with the dust cloud and crumbs flying all around him? That was Stephen Miller at 8. I was always trying to get him to clean up his desk — he always had stuff mashed up in there. He was a strange dude. I remember he would take a bottle of glue — we didn't have glue sticks in those days — and he would pour the glue on his arm, let it dry, peel it off and then eat it.

I remember being concerned about him — not academically. He was OK with that, though I could never read his handwriting. But he had such strange personal habits. He was a loner and isolated and off by himself all the time. (The Hollywood Reporter)

His behavior was so alarming that she had to have a conference with his parents.

How this is all relevant to 2018 or his work in the White House, I have no clue.

While many Trump admin critics were gleeful to see his elementary school teacher roast Miller and expose his strange habits as a kid, others asked, seriously?

I ate Playdoh once in first grade on a dare for a Jolly Rancher. Are we seriously doing this? https://t.co/aAbXpEUtsG

Even those who don't like Miller what Ms. Fiske did was just plain wrong.

I despise Stephen Miller, but now think even less of his deeply unethical 3rd grade teacher.

Teachers, please do not do this. Relatedly, it is extremely hard to get me to criticize a criticism of Stephen Miller. https://t.co/moJYaJU51U