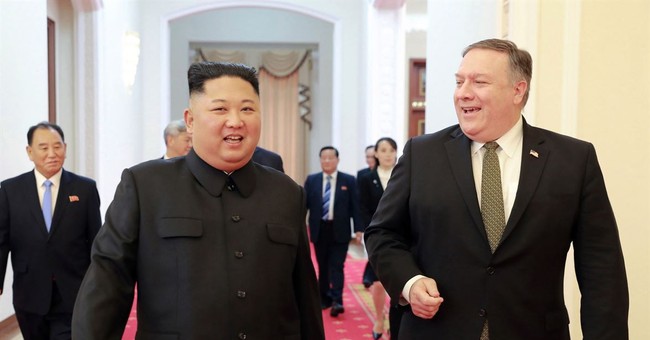 Secretary of State Mike Pompeo was in Pyongyang this Sunday to meet briefly with North Korean leader Kim Jong Un on their denuclearization efforts. He described the trip as productive.

Specifically, Pompeo revealed that North Korea agreed to allow international inspectors to survey their nuclear and missile testing sites. They just need to work out logistics.

Mr Pompeo, who met Mr Kim during a short trip to Pyongyang on Sunday, said the inspectors would visit a missile engine test facility and the Punggye-ri nuclear testing site as soon as the two sides agree on logistics.

"There's a lot of logistics that will be required to execute that," Mr Pompeo told a news briefing in Seoul before leaving for Beijing.

President Trump and Chairman Kim held an historic summit on June 12. Trump said it resulted in a "special bond" between the two leaders and he was optimistic about a denuclearized future. There has already been some indication that North Korea is willing to play nice. For instance, there were no ICBMs displayed at this summer's military parade, White House Press Secretary Sarah Huckabee Sanders noted.

“The recent parade in North Korea, for once, was not about their nuclear arsenal,” she said. “The president has achieved tremendous success with his policies so far. And this letter was further evidence of progress in that relationship.”

Following Pompeo's latest trip to the Korean Peninsula, Trump and Kim are "close" to finalizing details for a second summit.