Amy Schumer Dares Police to Arrest Her in Senate Building... 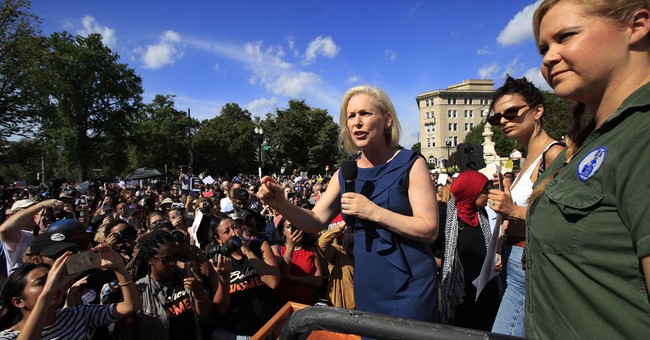 Comedian Amy Schumer dared the Capitol Police to arrest her Thursday at the Hart Senate office building. They took her up on the offer.

Here is @amyschumer telling cops she *wants* to be arrested.

Cop asks “Do you want to be arrested?”

Save this for the “I can’t believe I was arrested for free speech!” Tweet from her soon. pic.twitter.com/TLGaDAyh1T

Schumer, the cousin of Senate Minority Leader Chuck Schumer, was detained by police and escorted outside the premises. She was one of 300 protesters to make noise in the Hart building.

She wasn't deterred it seems.

“No matter how this goes, they cannot keep us down," Schumer said. "We will win. A vote for Kavanaugh is a vote saying women don’t matter."

Nor was she the only celebrity to be detained. Actress Emily Ratajkowski posted her experience on Instagram.

Today I was arrested protesting the Supreme Court nomination of Brett Kavanaugh, a man who has been accused by multiple women of sexual assault. Men who hurt women can no longer be placed in positions of power. Kavanaugh’s confirmation as a Justice of the Supreme Court of the United States is a message to women in this country that they do not matter. I demand a government that acknowledges, respects and supports women as much as it does men.

Protest and get arrested? This is what Fascism looks like.https://t.co/Y4DrVnHmVt

The Daily Caller's Benny Johnson, who witnessed the entire scene, reported that the incident wasn't quite as dramatic as the celebrities are making it seem.

I watched Schumer and Ratajkowski chatting with the police officers and dancing before they were led away. The group was smiling and under no duress. The officers gave the Hollywood crew pink wristbands for some reason before walking them out.

Based on the ease of the event, I did not expect there to be much made of the arrests. However, I was stunned to read the coverage of the event as far more dramatic and stress-filled than it actually was. No report mentioned that the two Hollywood stars verbally agreed to be arrested or that they were having a nice time while it happened. (Daily Caller)

Julio Rosas
Surprise: NY Dems Who Called for Cuomo to Step Down Now Appearing with Him, Open to Endorsement
Guy Benson
Caught Red-Handed: NBC News Busted for Editing Out a Crucial Detail in the 911 Call of the Ohio Shooting
Matt Vespa
CARTOONS | Tom Stiglich
View Cartoon
Most Popular