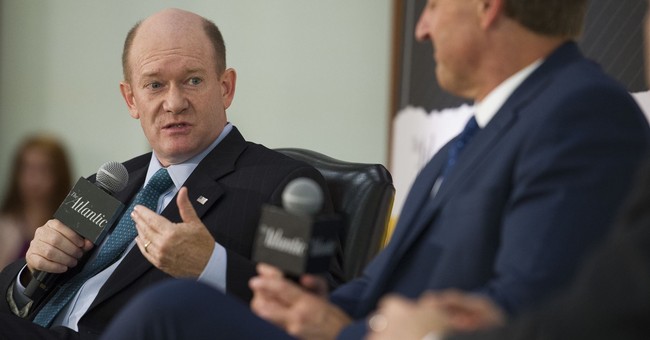 UPDATE: Sen. Coons told press Thursday morning that he is now on board with Durbin's letter.

Sen. Coons, who did not originally sign onto this letter, told @WillieGeist this morning that he has since consulted with Sen. Durbin and supports the assertions made in the letter.

Sen. Dick Durbin (D-IL) was one of eight Democrats to send a letter to Chairman Chuck Grassley claiming that the Republicans on the Senate Judiciary Committee sent inaccurate tweets about the FBI's previous six background checks into Judge Kavanaugh. The committee noted that nothing ever came up in those investigations to suggest Kavanaugh had a history of sexual assault or alcohol abuse, to which Durbin replied:

This tweet is not accurate. Committee Republicans must correct it. See our letter here: https://t.co/trJ9ymDjee https://t.co/cCVpAwCzEI

Sen. Coons has no clue what fellow Dems are referring to with new Kavanaugh allegation https://t.co/AxUcfymAkb pic.twitter.com/s4vTZqfQKu

“While we are limited in what we can say about this background investigation in a public setting, we are compelled to state for the record that there is information in the second post that is not accurate,” the Democrats' letter reads.

"What information?" Cuomo wondered. "And why is this coming out now?"

"I don't know," Coons said. "When was this published Chris?"

"I will have to go look at what it is that Sen. Durbin has posted and what he is implying here," Coons noted. Perhaps his fellow Democrats have incriminating knowledge he is "unaware of," Coons added.

Presumably, Coons's confusion means that Sen. Durbin didn't tell him about their latest letter to McConnell. Matt Wolking, a communications aide in Congress, said there's "zero chance" of that being true.

He noted an interesting fact: Coons was one of two Democrats on the panel who declined to sign the letter.

False. Two Democrats on the committee, Chris Coons and Amy Klobuchar, declined to sign the letter. Wonder why? https://t.co/nLQlU4RTxD

Wolking wasn't the only one to suggest that Coons and Klobuchar declined to add their signatures because the allegations in the letter were a bit farfetched.

Because this particular lie is so egregious that Coons and Klobuchar are steering clear. https://t.co/hy0o2oQInE

The committee is currently reviewing the findings of the FBI's seventh investigation into Kavanaugh.