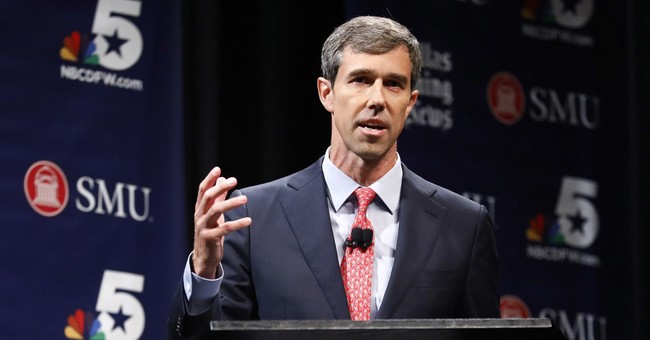 "He’s been a cult-like, very popular figure the way that he’s run the campaign, but you don’t vote on cult, you don’t vote on personality when you get to the U.S. Senate," Abbott said. "You vote on the issues."

“We saw it at my first race for governor four years ago when Wendy Davis was getting money and support from across the entire country, only to lose by 20 percentage points once it was revealed the positions that she really stood for," Abbott noted. "The same thing is happening for Beto O’Rourke.”

O'Rourke went viral a few weeks ago for an answer he gave about the NFL national anthem protests. He told the town hall that there is nothing more American than practicing the right to speech on the football field.

But, the Democrat has had his share of scandals. First, we learned he was involved in a DWI crash in 1998. That's one thing. But the police report from the incident claims he fled the scene. He vehemently denies it.

"I did not try to leave the scene of the accident, though driving drunk - which I did - is a terrible mistake, for which there is no excuse of justification or defense," O'Rourke said of the report.

PolitiFact did not buy it, giving him four Pinocchios because the police have a better idea about his behavior, considering he was very drunk.

Then, this week the media found an old theater review he wrote in the early 1990s demeaning female actresses in a play. He's what the 19-year-old wrote in his write up on “The Will Rogers Follies” for the Columbia Daily Spectator. (The last line is what caused issues.)

“Basically, the show documents the life of Will Rogers, the ‘lassoing fool,’ who rose from being an insignificant side show attraction to one of the more prominent political pundits and cultural statesmen in our history. Yet it is produced and directed in such a showy, glitzy, and ultimately, tacky manner, that one cannot help feeling disgusted throughout the show. Keith Carradine in the lead role is surrounded by perma-smile actresses whose only qualifications seem to be their phenomenally large breasts and tight buttocks.” (Politico)

"I am ashamed of what I wrote and I apologize," O'Rourke said. "There is no excuse for making disrespectful and demeaning comments about women."