Lindsey Graham on Booker's 'Gotcha' Document: You Should Have 'Read the Damn Thing' 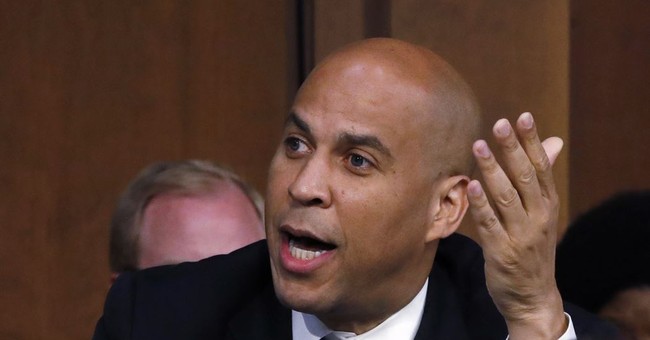 Democratic senators put on quite a show Thursday at Supreme Court nominee Brett Kavanaugh's confirmation hearing. Desperate for a "gotcha" moment that would disqualify the Trump nominee, the senators asked pointed questions and gave lectures about transparency. But, they embarrassed themselves in the process.

Booker's theatrics came at the very beginning of the hearing. He interrupted Chairman Chuck Grassley's opening remarks to announce that he had broken Senate rules and released "committee confidential" documents about Kavanaugh's opinions on racial profiling. He even referred to himself as "Spartacus," as if he was some kind of martyr.

Well, two things. First, it turns out that those "confidential" documents he was talking about had already been cleared for release. Bill Burck, the former Bush administration lawyer overseeing the production of Kavanaugh's documents, said so in an email, adding he was surprised by Booker's histrionics.

So, his "sacrificial" heroics were all for show. Second, the document in question showed Kavanaugh was against racial profiling. So, just like that, both of his narratives were debunked.

"If you're gonna use a document to disqualify a nominee, read it," Graham suggested. "If you read the damn thing," he added, you'll see that Kavanaugh "was against racial profiling."

Other Republican senators poked some fun at Booker Friday morning.

On this day in 71B.C. the Thracian gladiator Spartacus was put to death by Marcus Licinius Crassus for disclosing confidential scrolls. When informed days later that in fact the Roman Senate had already publicly released the scrolls, Crassus replied “Oh, ok, my bad”.

“You know... I knew Spartacus.” pic.twitter.com/94eGPCkOp1