Friday Fun: Theresa May Shows Off Her Dance Skills 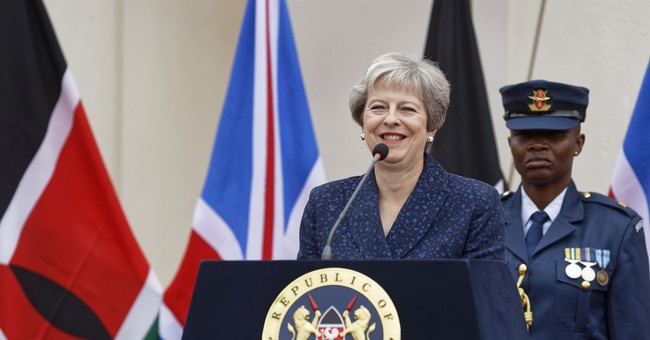 British Prime Minister Theresa May is the latest world leader to put her dance moves on display. During a trip to Kenya this week, the UK leader joined Kenyan scouts at the United Nations' Nairobi campus for the launch of an initiative to inspire young people to combat single-use plastic pollution, according to the Sunday Times. She joins the ranks of leaders who have been bold enough to bust a move, only to be swiftly mocked.

Ken-ya keep up with Theresa May? Prime Minister busts out more moves on her Africa trip https://t.co/kc8JDDpngq pic.twitter.com/GVgtWpA4ti

She has been nicknamed "Maybot" for her rhythmically challenged moves.

At least May poked some fun at herself.

"I think the chances of Strictly Come Dancing [UK version of Dancing With the Stars] coming calling are pretty minimal," she said after her dancing went viral.

The UK prime minister's unfortunate dancing gives us a chance to revisit some other world leaders who have been known to bust a few moves.

Canadian Prime Minister Justin Trudeau took his Bhangra dancing in India very seriously, both in 2015 and 2018.

Then there's former President George W. Bush, who just can't seem to help himself when he hears music.

Our current president put on his dance shoes when he hosted "Saturday Night Live." (skip to the 1:32 mark)

I apologize if this post has caused anyone any unwanted heart burn.