Here's What DeSantis, Trump Had to Say About the Democrats' 'Failed Socialist' Nominee 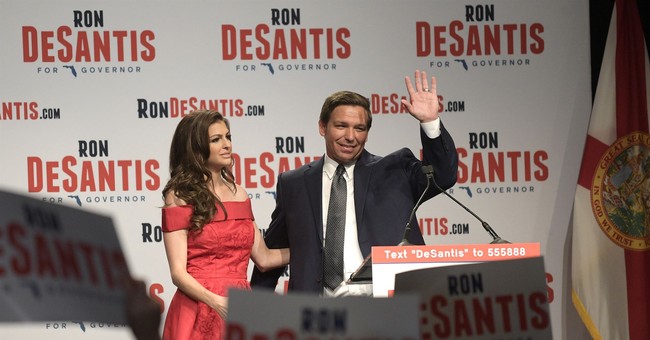 Rep. Ron DeSantis (R-FL), who secured the GOP's nomination in the Florida gubernatorial election Tuesday, has little fear about his Democratic opponent. Tallahassee Mayor Andrew Gillum, DeSantis said, is "the most liberal candidate that the Democratic Party has ever nominated in the state of Florida by a country mile in a governor’s race.” His message is unlikely to resonate among all Florida voters, DeSantis predicted.

Gillum did pull off an impressive win, though, one that surprised even him. DeSantis gave his opponent props for capitalizing on the grassroots energy, but noted that the Republican received twice as many votes in his primary than Gillum did. Sen. Bernie Sanders (I-VT) endorsed him and he got the blessing of progressive darling Alexandria Ocasio-Cortez. Yet, the "majority of Democratic primary voters rejected him," DeSantis noted. So too will the state of Florida.

"He’s much too liberal for Florida," DeSantis said.

“(Gillum) wants to abolish ICE; he wants a billion-dollar tax increase; he wants a single-payer health care system in Florida, which would bankrupt the state. I’m trying to make Florida even better. He wants to make Florida Venezuela,” DeSantis said, adding that Gillum’s tenure as mayor has been “absolutely disastrous.”

President Trump, who supported DeSantis during the primary, congratulated him and told him he has nothing to worry about come November.

What our state and country needs is decency, hope, and leadership. If you agree, join us at https://t.co/fm0ODFFGWU. Also, @ me next time, @realDonaldTrump. https://t.co/59dQy8RLsm