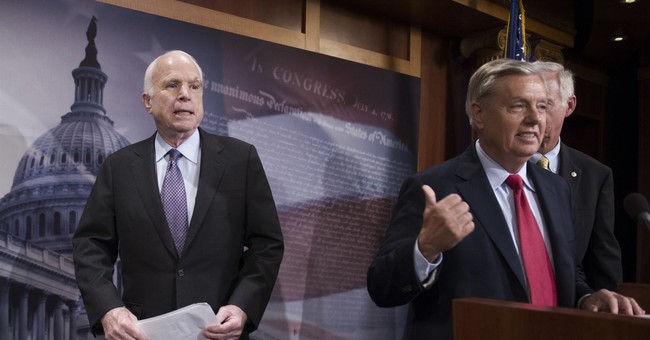 Sen. Lindsey Graham (R-SC) gave a heartfelt farewell address to his friend Sen. John McCain (R-AZ) Tuesday on the Senate floor. Graham told his colleagues he was going to try to make his "after action report" about McCain fun. So, he told a few of the late senator's "dumb jokes," which were often made at Graham's expense.

"I wish you were in my Naval Academy class," McCain frequently said to Graham. Why? "Because I would have been sixth from the bottom, not fifth."

McCain, however, also poked fun at himself. Being one of several Arizona presidential nominees to fail to win the presidency, he quipped that Arizona is "the only place in America" where mothers can't tell their children they can grow up to be president.

Graham learned so much more from McCain than a handful of silly jokes.

"I learned how to fight," Graham said. Yet, he also learned "how to forgive."

It's well known that McCain suffered as a POW in Vietnam for five years. Amazingly, however, he led the effort toward reconciliation with the country that left him with physical disabilities. Graham recalled having the honor of traveling to Hanoi with him and witnessing the welcome he received.

"He was Elvis in Vietnam," Graham said. "People adored him."

Graham also learned that one should fight for their ideals, even if it means going against popular opinion, such as his supporting the surge in Iraq.

Graham also learned how to lose from his late friend. In 2008, McCain "was prepared to be president, but it was not his to have." Instead of moping or being bitter, "John taught us how to lose." He gave a concession speech in which he humbly noted, "President Obama is my president."

"People remember his concession speech as much as anything else," Graham beamed. "He healed the nation at a time he was hurting."

"He failed a lot but he never quit," Graham added. "He was successful in spite of his failures."

Graham is "lucky enough to have walked in his shadow." He was lucky "to be in the presence of a giant at a time when everything around us was so small."

"I do not cry for a perfect man," Graham said. "I cry for a man who had honor and who was always willing to admit to his imperfection."

McCain "lived life to the fullest," Graham noted. In fact, it seemed like he had "ten lives."

"If we sent John a bill for all the planes he crashed, he’d never pay it off," Graham quipped.

Graham noted that since McCain's passing, strangers - cops, waiters, etc. - have come up to him to comfort him.

"My name is Graham, not McCain," Graham said. "But I feel like a McCain. I don’t know if I earned that honor, but I feel like it. "

As for his final learned lesson, "To Team McCain, you taught me what loyalty is all about."