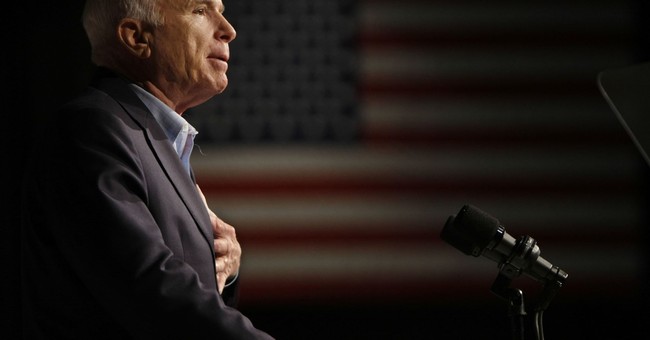 Vietnam War hero and Sen. John McCain (R-AZ) died this weekend after a yearlong battle with brain cancer. Most of those who heard the sad news began sending thoughts and prayers to his family and remembering him for his lifetime of service.

Then there was Vox editor Laura McGann, who was hung up on how McCain chose former Alaska Gov. Sarah Palin as his running mate in the 2008 presidential election.

That take was disrespectful enough, but she then wrote a whole piece about how McCain was responsible for President Donald Trump.

The party of Donald Trump began almost 10 years ago to the day, when John McCain tapped Sarah Palin to join his ticket.

It’s one of the most important moments of McCain’s career. He proved willing to empower a demagogue when he thought doing so would improve his political fortunes, exactly the sin so many of his colleagues in the Republican Party have committed since Trump won their party’s nomination.

McGann added that McCain "sacrificed" and "betrayed" his values to try to win the presidency.

McCain, who passed away at age 81, is remembered as a maverick, a man who crossed the aisle and built relationships with Democrats. But he also betrayed his own values hoping to win a presidential election, and sent the Republican Party down the path to Trump.

McCain's colleagues, who know him better than McGann, had a much different take on their late friend. Sen. Jeff Flake, his fellow Arizona Republican, called McCain "the conscience of the Senate." Democrats respected him too. Senate Minority Leader Chuck Schumer even suggested renaming the Russell Senate building in his honor.