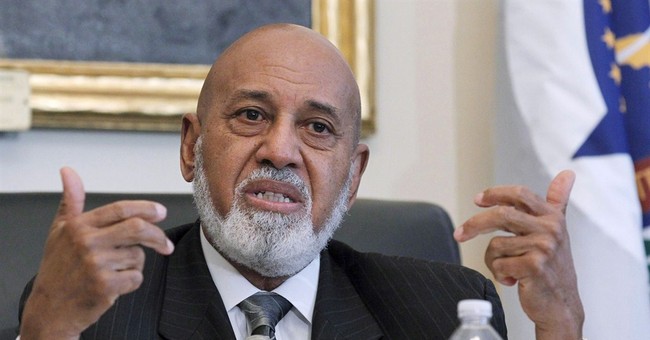 Rep. Alcee Hastings (D-FL) joked over the weekend that it would be a "catastrophe" if anybody jumped in after President Trump if he fell into the Potomac River, which goes through Washington, D.C. Hastings said he was borrowing the joke from Ari Silver, the son of former Florida state lawmaker Barry Silver.

The Daily Caller has the video.

“I will tell you one joke,” Hastings said at a rally in Sunshine, FL. “Do you know the difference between a crisis and a catastrophe?”

“‘A crisis is if Donald Trump falls into the Potomac River and can’t swim,'” Hastings said, retelling the joke. “‘And a catastrophe is anybody saves his ass."

Hastings's cruel comedic routine, which got cheers from the audience, follows a few other Democrats' who have joked about wishing harm on Republicans. Last week, Rep. Steve Cohen (D-TN) joked at a community prayer breakfast - yes, a prayer breakfast - that he wishes Rep. Marsha Blackburn (R-TN) would jump off a bridge. He said she would do it if asked by Trump.

Asked for a response, Cohen told the Huffington Post it was "obviously humor."

Other Democrats, like Rep. Maxine Waters (D-CA) have dared people to "harass" Trump supporters and Trump administration members anywhere they can find them.

Many have bullied White House employees, like the time Press Secretary Sarah Huckabee Sanders could not even enjoy a peaceful meal.