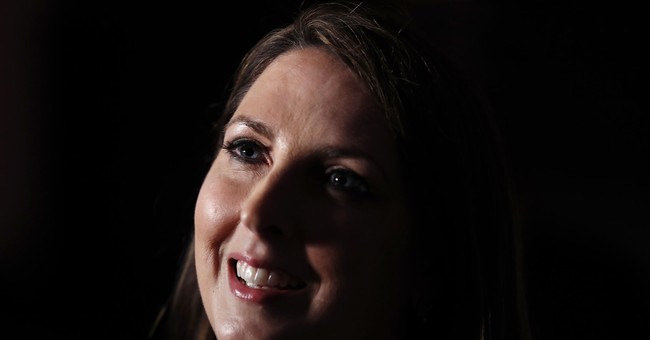 Democratic National Committee Chair Tom Perez was beaming to share the news that women are leading the Democratic Party. His counterpart at the RNC had something to say about that.

A woman is actually leading the Republican Party. https://t.co/5zE39OPZ1P

Some social media users were impressed by the mic drop, using words like "Boom!" and "Savage."

McDaniel's gender, however, has nothing to do with her impressive effort in the RNC's record breaking fundraising haul over the past year. The committee raised $157.7 million overall in the 2017-2018 cycle - a record for a non-election year.

“If you focus on the fundraising and you do well there, then you get a lot of credibility in a town that didn’t know who I was,” McDaniel told Politico in March.

Looks like she was just the right person for the job.

Furthermore, Kellyanne Conway, as Donald Trump's campaign manager, was the first woman to ever lead a successful presidential campaign. Sarah Huckabee Sanders, meanwhile, is the first mother to ever be White House press secretary.

Granted, the Democrats do have a number of women in leadership positions, including Nancy Pelosi as House speaker. But, she's not exactly popular at the moment and even many in her own ranks are questioning her influence. Some are even openly opposing her, while other lawmakers are waiting in the wings to replace her should she fail to get the votes in her re-election bid. We also can't forget the Democrats did have the first ever female nominee for president in 2016.

Perez and the DNC are currently facing heat for staying silent on the domestic violence charges against deputy chair Keith Ellison. It wasn't until late into Election Day on Tuesday that the committee spoke up and said they are reviewing the allegations. Ellison won his primary race for Minnesota attorney general.