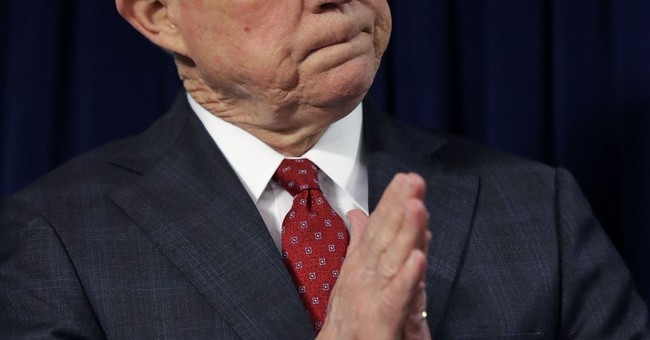 While President Trump was up early Tuesday morning slamming former White House aide Omarosa Manigault-Newman, who is all over the media circuit trashing the administration she once called home, Trump saved one special tweet to again attack his attorney general Jeff Sessions. As the countless times before, Trump is frustrated that Sessions recused himself from the special counsel investigation on Russian collusion, which he prefers to call a "witch hunt."

“They were all in on it, clear Hillary Clinton and FRAME Donald Trump for things he didn’t do.” Gregg Jarrett on @foxandfriends If we had a real Attorney General, this Witch Hunt would never have been started! Looking at the wrong people.

Before suggesting Sessions was a fake, the president has referred to him as "weak" and "beleaguered." He wondered aloud why Sessions has not done more to prosecute Hillary Clinton over her email abuse. He has also questioned the AGs' whereabouts on other matters like the controversy over FBI lawyer Lisa Page and former FBI Agent Peter Strzok, who sent thousands of anti-Trump texts to one another during the 2016 election.

Had Sessions not shirked his responsibilities, Trump suggested, then the Russia investigation would be focused on the Democrats, not him.

Fired FBI Agent Peter Strzok is a fraud, as is the rigged investigation he started. There was no Collusion or Obstruction with Russia, and everybody, including the Democrats, know it. The only Collusion and Obstruction was by Crooked Hillary, the Democrats and the DNC!

Several analysts have wondered why Sessions still has his job.