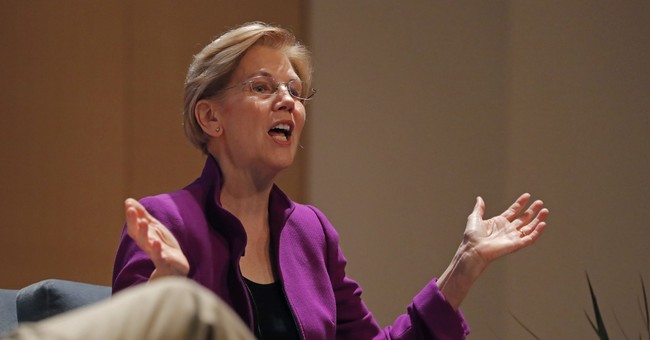 During a speech at Dillard University in New Orleans earlier this month, Sen. Elizabeth Warren (D-MA) said the American criminal justice system is "racist...front to back.” Police were not thrilled by those comments, to say the least.

“I now cannot trust her words are real,” Yarmouth police Chief Frank G. Frederickson told the Boston Herald on Friday. “It appears she is telling the audience in front of her what she thinks they want to hear.”

Warren has “diminished the sincerity of her condolence efforts” and “slapped in the face” all law enforcement, Frederickson added.

"Labeling the entire criminal justice profession as 'racist' spreads false and damaging information about our members," he wrote in a letter. "We feel we do a very good job in Massachusetts of producing professional and community oriented police officers."

The dangers police face can best be calculated by the number of fallen officers year after year. About 135 cops died in the line of duty in 2016, making it the deadliest year for police officers in at least five years. At least 54 law enforcement officers have died while on duty since the start of 2018. In the past few years, anti-police sentiment has resulted in police being victims just because they wear the badge. Five officers were killed in Dallas, Texas during a Black Lives Matter protest on July 7, 2016. The next day, an officer in Ballwin, Mo. was shot from behind and critically injured during a traffic stop while he was walking to his patrol car.

In 2016, a black Army veteran, Lakeem Keon Scott, targeted police on a highway in Bristol, Tennessee. One woman was killed and three other people were injured in that exchange, including an officer.

The unusual ambush attacks on police in Tennessee, like many others, could partly be explained by deadly incidents between police and African-Americans, according to authorities.

"Preliminarily, the investigation reveals Scott targeted individuals and officers after being troubled by recent incidents involving African-Americans and law enforcement officers in other parts of the country," the Tennessee Bureau of Investigation said at the time.

The Yarmouth Police Department, which Wojnar and Frederickson represent, was also struck by tragedy in their own ranks. On the top of their Facebook page is a photo of fallen officer Yarmouth K9 Sergeant Sean M. Gannon.

Warren's diatribe was "a slander of every law officer and every prosecutor in America," Sessions said during a speech in Georgia last week. "And, frankly, I think it is an insult to their families and to the crime victims they have helped to face their attacker."

After the swift response, Warren backtracked a bit, noting she was speaking about "an entire system - not individuals - and will continue to work on reforms to make the criminal justice system fairer."

Warren added that there are a lot of "terrific," "hardworking" and "dedicated" people in our criminal justice system.