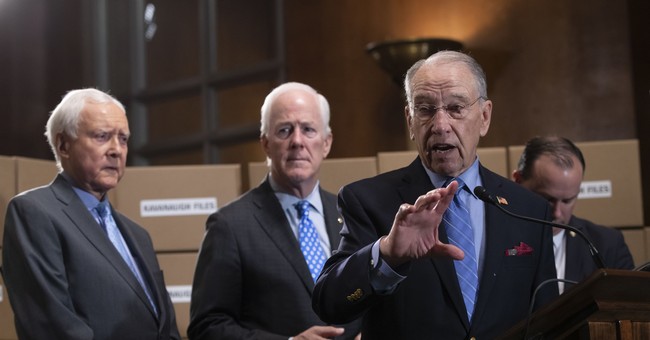 Sen. Orrin Hatch (R-UT) has taken the rare step of endorsing a candidate in a local election. This week, a group of parents who lost children in the shooting at Marjory Stoneman Douglas High School this past Valentine's Day demanded the current Broward County Public School District school board be tossed for their inaction. The parents are particularly frustrated by the district's decision to end plans to use metal detectors at the school and their abruptly ending an independent investigation.

“They blame each other for decisions that were made and unmade,” said Fred Guttenberg, whose daughter Jaime died in the shooting. “They should be fired.”

Ryan Petty, another of the grieving parents who lost his daughter in the shooting, is taking matters into his own hands. He's running for the school board.

Hatch said Petty was instrumental in helping Congress pass the STOP School Violence Act, which he says will help usher in meaningful school safety measures in the wake of the tragedy. It will, for instance, help train teachers and students how to spot warning signs and assess threats.

When tragedy struck in his community and he lost his sweet daughter Alaina, @rpetty jumped to action, helping me usher in the most meaningful school safety legislation in history.

I know him well, and I know students in Broward County will be in great hands with his leadership. pic.twitter.com/bJa5u1quDA

"I'm here to make sure I'm one of the last fathers who ever has to bury their daughter or son or loved one from a senseless act of violence in a school," Petty said at a press conference with Hatch earlier this year.

Sen. Marco Rubio (R-FL), who could also be spotted at that presser, has likewise endorsed Mr. Petty.

Parkland student Kyle Kashuv, who is featured in the above video, said we should be paying particular attention to this race.

U.S. Senators rarely endorse anyone in local elections, let alone in a different state, and especially not the President pro tempore of the United States Senate. I hope the media takes note to its rarity and reports on it@RobertwRuncie, your pink slip is on its way. #FixIt https://t.co/dmAciK2ozk