Chicago Marchers: Why Would We Want the Mayor at Our Rally? 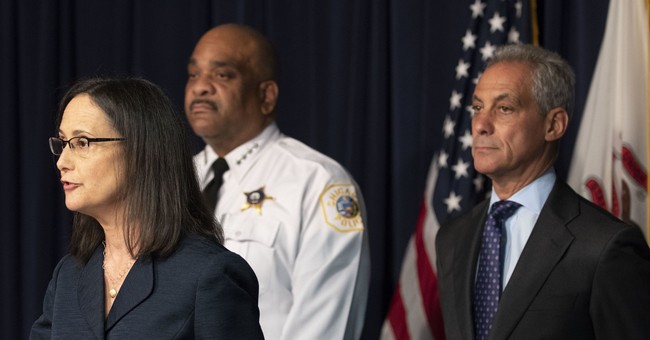 Chicago Mayor Rahm Emanuel has done little to address the violence in his city, his critics say. That's why the organizers of an upcoming non-violence rally want him to have nothing to do with it. In fact, the demonstrators are planning to call for Emanuel and police Superintendent Eddie Johnson to step down. One of the leading organizers, Rev. Gregory Livingston, even compared Johnson to infamous figures like Gov. George Wallace, the former Alabama governor who spewed racism, promoted segregation and resisted civil rights.

“The call of the people is ‘Resign Rahm,’” Livingston said. “So how, then, can you back your own regime change? How do you sanction your own termination? How dumb, naive and self-hating do you think we are?”

“The protest route has been well publicized. We have no need to talk with Superintendent Johnson,” Livingston added. “Did Dr. King talk strategy with Bull Connor? With Gov. George Wallace?” (Chicago Tribune)

Emanuel has been condemned for his inaction as Chicago experiences more shootings and homicides. This past weekend, 42 people were shot, 5 of whom were killed. Almost 300 people have been killed in the city this year. The Chicago Tribune offered some possible causes for the bloodshed, including increased gang warfare, access to guns, police morale, and poverty.

On Thursday, protesters plan to walk along Lake Short Drive and end up at Wrigley Field during a Chicago Cubs game. Livingston admitted that arrests will be likely at the "non-violent" march and marchers may force their way into the baseball stadium. Another organizer, Rev. Ira Acree, concurred.

“We have people who are committed, who are ready to get arrested,” Acree said. “And those who don’t, they’ll stay back. But certainly, people are going to get arrested.”