Sen. Cornyn Tells Cory Booker to 'Get a Grip' 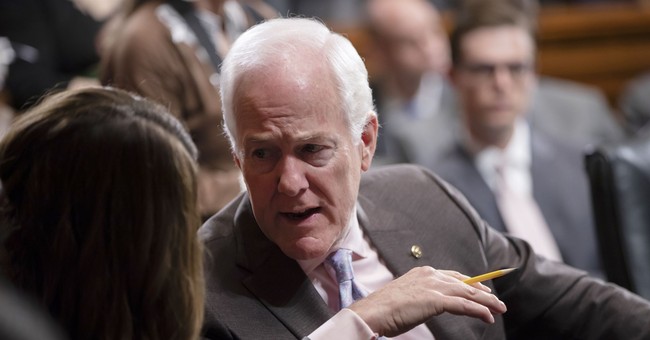 Sen. Cory Booker (D-NJ) warned his colleagues that a vote for Supreme Court nominee Brett Kavanaugh is, unequivocally, a vote for "evil." He was not being facetious. He even quoted Scripture.

Sen. John Cornyn (R-TX), trying his best not to laugh, asked his Democratic colleague to come back to reality during a speech on the Senate floor Wednesday.

"It's hard to take statements like that seriously," Cornyn said of Booker's fire and brimstone rhetoric. "To me that's completely unhinged and detached from any reality."

"My advice to some of our friends across the aisle who are engaged in this kind of superheated rhetoric, my advice is get a grip," he added. "Get a grip."

In his remarks, Cornyn explained that Kavanaugh is as mainstream a candidate as they come. At his confirmation for the D.C. circuit court, he was confirmed by a "substantial bipartisan vote," Cornyn reminded Democrats.

Yet, Democrats have been using Kavanaugh's past writings and opinions to try and prove that the nominee would fail to check the president's behavior. Senate Minority Leader Chuck Schumer, who pledged to block Kavanaugh's nomination with "everything he's got," recently brought up a statement the nominee made about United States v. Nixon. During a panel discussion in 1999, Kavanaugh suggested that perhaps the tension at the time of that court case caused the court to rule "erroneously." Aha! Schumer said. That proves Kavanaugh would have left President Nixon off the hook! Surely he'd do the same for President Trump. Schumer ignored the other times Kavanaugh applauded the court's decision demanding Nixon give up the Watergate tapes.

The least these Democrats can do before further derailing Kavanaugh's character and stating their "implacable opposition" is meet with the guy, Cornyn suggested.