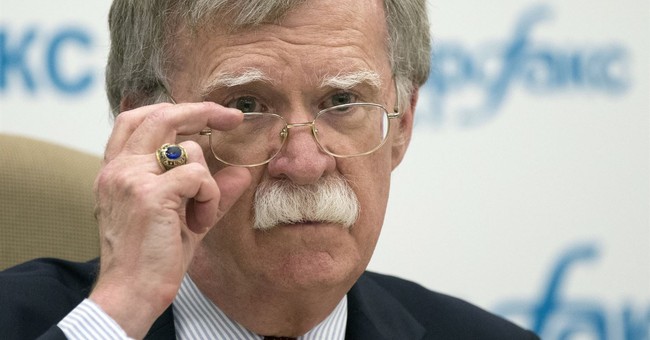 CNN's Jake Tapper was bummed to note that National Security Advisor John Bolton had bailed on his scheduled appearance on "State of the Union" Sunday. It apparently had something to do with President Trump's hostile exchange with CNN reporter Jim Acosta at last week's joint press conference with British Prime Minister Theresa May. Trump called CNN "fake news," after which Acosta wanted to ask a question, considering the president had just insulted his network.

That's what derailed the "State of the Union" interview, according to Tapper.

Update: @AmbJohnBolton had been locked in for tomorrow’s @CNNSOTU. Then the president attacked CNN during his UK presser, and our WH correspondent tried to ask a question. We are told Amb. Bolton remains fully prepared to do the interview but the White House has canceled it.

White House Press Secretary Sarah Huckabee Sanders, though, said that's not exactly the case. She provided the same context, but came to a different conclusion. Here's her side of the story:

Actually a @CNN reporter disrespected @POTUS & PM May during their press conf. Instead of rewarding bad behavior, we decided to reprioritize the TV appearances for administration officials. https://t.co/58LaJH6WaD

This is just the latest bad blood meeting between the Trump White House and CNN. Particularly Mr. Acosta, who is the original bearer of fake news, according to the president. Trump also called out NBC News as "dishonest" during his presser with Prime Minister May. Fox's John Roberts felt compelled to defend both of the targeted networks in a taped video after the press conference.