Steny Hoyer Chides Colleagues for Heckling Trump on the Hill 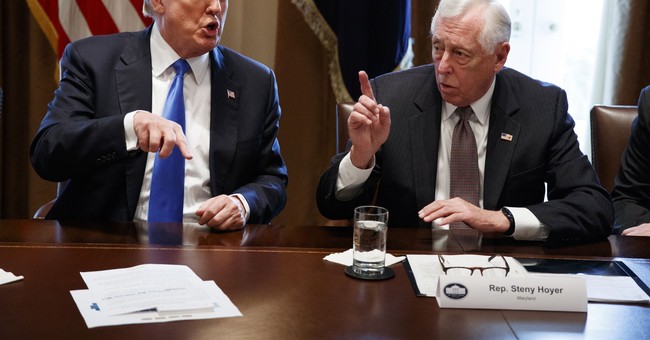 A group of House Democrats heckled President Trump when he was leaving Capitol Hill Thursday after meeting with lawmakers on immigration. He and his administration had been receiving vast amounts of criticism for the zero tolerance policy that separates illegal immigrant families at the border. After the meeting he was confronted by about six Democratic lawmakers, who shouted things like, "stop separating our families!" and "Mr. President, don't you have kids!" They also held signs that read, "Families Belong Together."

Congressional Hispanic Caucus members yell at Trump about the “zero tolerance” policy as he walks by after his meeting with GOP lawmakers at the Capitol. pic.twitter.com/YMva974pnq

In an interview with CNN's Kate Bolduan on Thursday, Rep. Steny Hoyer (D-MD) agreed that it was "not appropriate" to heckle the president, but appreciated the passion that was coming from colleagues who have "very strong feelings" about the immigration. He turned the tables back on Trump, insisting that he is the most confrontational person in Washington.

Hoyer admitted, however, that the president's personality "does not justify us following suit." His Democratic colleagues should have chosen "some other venue" to make those points.

Following his immigration meeting on the hill, Trump signed an executive order to keep families together at the border during processing.