DHS Chief Hits Back at 'Offensive' Questions at WH Briefing 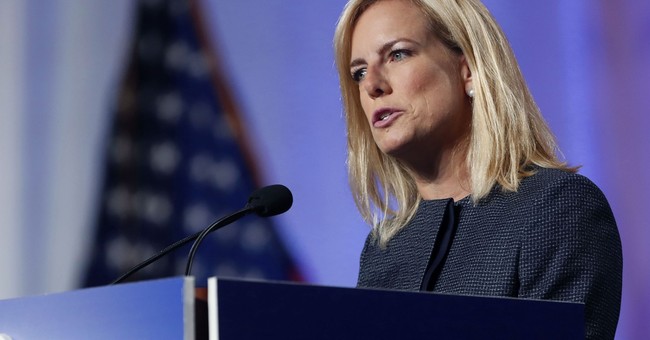 The hottest topic at Monday's White House press briefing was, expectedly, the Trump administration's policy of separating children from parents who are attempting to enter the country illegally. DHS Secretary Kirstjen Nielsen took the press's pointed questions, and she did not hide her emotions when answering them.

She denied accounts that the policy amounted to "child abuse" or was comparable to the internment of Japanese Americans during World War Two.

She was especially offended by the following exchange.

"I find that offensive," Nielsen shot back. "Why would I ever create a policy that purposely does that?"

At an earlier event Monday, Nielsen said the White House would not apologize for the policy.

If Congress closes the loopholes that allows adult migrants to take advantage of the undocumented children's policy, then the families will be able to stay together throughout the proceedings, she agreed at the briefing.

That was the message from White House Press Secretary Sarah Huckabee Sanders too, who followed Nielsen to the podium. The president, she said, is trying to work with Congress to find a solution.

Trump "doesn't like the process," Sanders said, and he wants to see Congress fix the law.

Congress creates the law, and the White House enforces it, she reminded reporters. People should be "begging" Congress to join the president and offer solutions.

The president is sick of watching people kick the problem down the road, Sanders added.