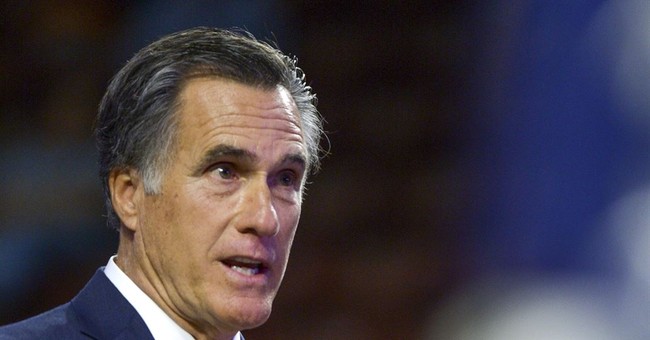 Former Massachusetts governor and Utah Senate candidate Mitt Romney predicts President Trump will coast to re-election in 2020. The president's policies, and the Democrats' likelihood of imploding, he explained at a three-day, closed-door summit in Utah’s mountains, are what may seal the deal. The Associated Press had access to the event.

“I think that not just because of the strong economy and the fact that people are going to see increasingly rising wages,” Romney said, “but I think it’s also true because I think our Democrat friends are likely to nominate someone who is really out of the mainstream of American thought and will make it easier for a president who’s presiding over a growing economy.” (Associated Press)

Trump was asked about the remarks before boarding his plane to the G7 Summit in Quebec, Canada.

"Romney is a straight shooter," Trump said, adding that he appreciated the former governor's comments.

They were rather kind words coming from a man who once tore Trump apart as a "con man" during the 2016 presidential campaign. On the eve of the Utah primary, he warned voters that Trump was a "phony" and a "fraud." He accused him of "playing the American public for suckers" and urged Republicans not to vote for him.

Although Romney was reportedly considered for a cabinet position, he has not kept his criticism to himself during Trump's presidency. Last August, he asked the president to apologize for how he responded to the white supremacist rally in Charlottesville, VA. As late as last week, Romney said he doesn't consider Trump a solid "role model" for his grandkids.

But, judging by his comments this week, the Democrats are poised to nominate someone worse.