Melania Responds to Theories About Her Public Absence 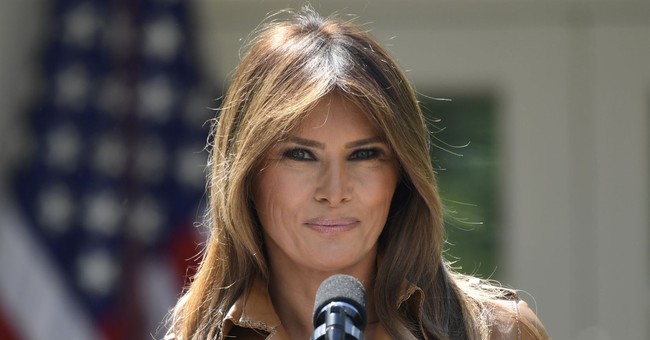 For days the media has been musing about First Lady Melania Trump's whereabouts. The internet has fueled rumors about her public absence since her hospitalization. Time Magazine has a summary of some of the more widely discussed theories.

The first lady’s absence from public view has spawned all sorts of wild theories on social media and elsewhere: Has she moved back to Trump Tower in New York City? Is she cooperating with the special counsel’s Russia investigation? Is her health in jeopardy? Has she entered the witness protection program? And so on. (Time)

Mrs. Trump's communications director Stephanie Grisham added that although her boss has not made a public appearance in a few weeks, she has been involved in White House agenda prep.

“She's doing really well,” Grisham told ABC News. “She's been involved in several internal meetings with staff all last week, and that continues this week. We've been going over initiatives and other long-term planning for events such as the congressional picnic and 4th of July.”

Mrs. Trump was hospitalized at Walter Reed Medical Center a couple of weeks ago to have surgery for a "benign kidney condition." She returned to the White House on May 19, but had not been seen in public since May 10, when she and President Trump welcomed home three Americans who had been held as prisoners in North Korea.

"Sadly, we deal with conspiracy theories all the time, so this is nothing new, just more silly nonsense," Grisham told Politico on Tuesday. "She is doing great. I wouldn't characterize it as a long absence. She was hospitalized for almost a week and is now home and recovering."

Just as soon as the media got its answer, however, they had another question: Who wrote Melania's tweet? The phrase "working overtime,” which has been featured in several of President Trump's tweets, had some outlets wondering whether 45 penned the message.