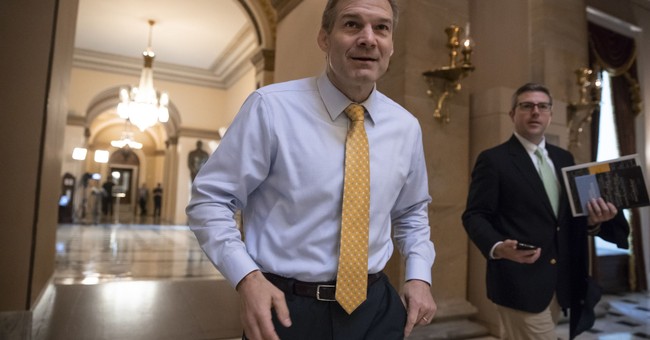 It's time to "clean house" in Congress, and Jim Jordan is the man to do it, a group of conservative leaders wrote Monday. Momentum for the Republican congressman from Ohio to become the next speaker of the House began just as soon as Paul Ryan announced his retirement. Jordan, a member of the staunchly conservative House Freedom Caucus, told the media that he is considering a run because his colleagues have encouraged him to throw his name in the ring. He would likely be facing off against GOP Majority Leader Kevin McCarthy and Rep. Steve Scalise (R-LA).

Jordan has been pretty vocal against the GOP leadership himself, sounding off on the recent spending bill Congress passed. Not only did the massive legislation fund things they had promised not to, but the legislators who would ultimately be responsible for it barely had time to read it.

On Monday, a group of 114 influential conservatives also nudged Jordan to make an announcement for speaker. The group, made up of individuals representing the Tea Party Patriots, FreedomWorks, Gun Owners of America, the American Family Association and more signed a letter to Rep. Jordan urging him to drain the swamp.

"America needs you to declare yourself as a candidate for Speaker at once," the leaders write. "We write to you on behalf of millions of Americans who want Congress to Drain the Swamp."

The signatories use poll numbers to make their case. A new survey conducted by John McLaughlin for the Ear to the Ground Listening Project, they point out, revealed that 60 percent of those polled want to drain the swamp. Only 6 percent believed Republicans will keep their campaign promises.

Right now, what Americans need more than ever, the conservative leaders argue, is a leader who will work with Trump to enforce his policies, not obstruct them. Let's rein in government and finally get that wall built, they urge (paraphrasing).

"You must take the lead," the conservative group emphasizes again at their conclusion.