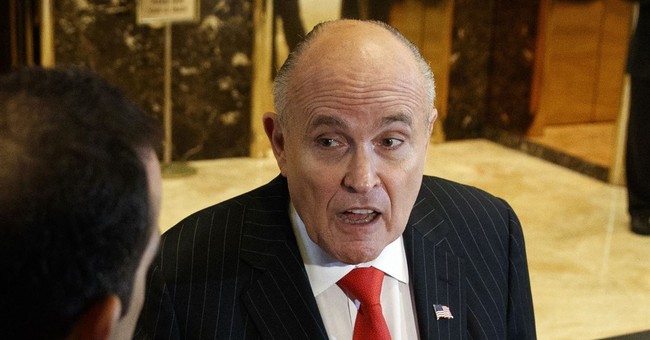 Former New York City Mayor and current President Trump attorney Rudy Giuliani ripped James Comey a new one in an interview with Fox News's Sean Hannity Wednesday night. Giuliani has the "indignity" of knowing he hired Comey for his first big job, because the former FBI director has proven himself to be a "disgraceful liar."

"Every FBI agent in America has his head down because of you," Giuliani said of Comey, who is currently on his book tour for "A Higher Loyalty," which is highly critical of Trump.

What did he lie about? Hannity asked.

Well, for starters, Giuliani explained, Comey lied about his conversations with former FBI Deputy Director Andrew McCabe because "he knew all of McCabe's conflicts." He also lied about his chats with President Trump in regards to whether he was a target in the special counsel's Russia investigation.

Giuliani didn't only have insults and names for Comey - he believes his crimes are deserving of justice. For instance, Comey should be "prosecuted" for leaking classified FBI intel.

The FBI director's handling of the Hillary Clinton email investigation was also a "disgrace." Had Clinton won the presidency, Comey would have been gone day one, Giuliani surmised.

Giuliani is "embarrassed" that he ever hired him.

Trump may still interview with special counsel Robert Mueller, Giuliani said, but he said he would direct Trump to sit for only two to three hours, not the 12 hours that has been reported. Trump's newest counsel, Emmet T. Flood, however, has reportedly said there will be no interview.

Giuliani echoed President Trump in dismissing the Russia investigation as a "witch hunt."

“Sessions should step in and close it.”