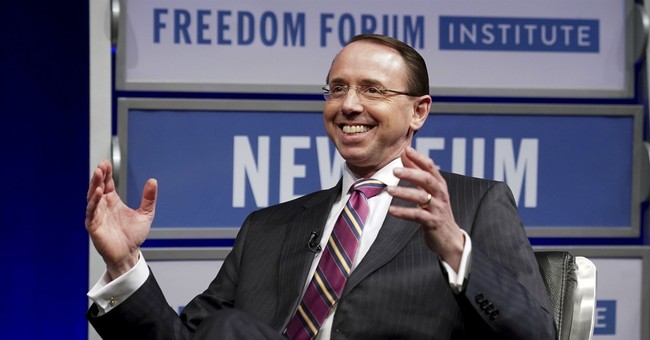 House Freedom Caucus members have intentions to try and impeach Deputy Attorney General Rod Rosenstein. The conservative bloc drafted articles of impeachment against the official who they say is refusing to cooperate with congressional requests. A few committees want to see documents related to the FBI's warrant to surveil former Trump campaign adviser Carter Page and the investigation into Hillary Clinton’s use of a private email server, for instance.

The impeachment effort is not likely to get further than the page it was drafted on, but it serves as "a provocative political weapon for conservatives in their standoff with Mueller and the Justice Department."

“I think they should understand by now that the Department of Justice is not going to be extorted,” Rosenstein said at the Newseum Tuesday. “We’re going to do what’s required by the rule of law, and any kind of threats that anybody makes are not going to affect the way we do our job.”

Rosenstein noted that allowing Congress to "rummage through" their files would violate the separation of powers. He also got in a dig at the conservative caucus, noting “they can’t even resist leaking their own drafts.”

The verbal back and forth continued when Rep. Mark Meadows (R-NC), chairman of the House Freedom Caucus, responded to Rosenstein's response.

“If he believes being asked to do his job is ‘extortion,’ then Rod Rosenstein should step aside and allow us to find a new Deputy Attorney General — preferably one who is interested in transparency,” according to Meadows.

The deputy AG has proven himself to be "a lot of rhetoric with little facts,” Meadows added.

Rosenstein, who oversees Robert Mueller's special counsel investigation into Russian collusion, was also asked for a timeline on the probe. He didn't give one, only noting that like all investigations, the team intends to move "as expeditiously as possible."