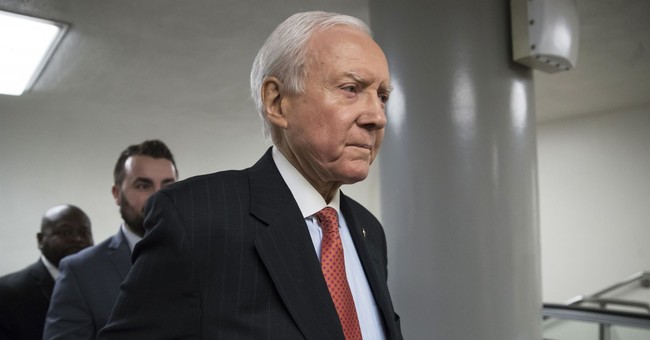 "What I will not do—and what I urge my colleagues to reject—is subvert our constitutional design in favor of momentary urgencies," Hatch writes in the Wall Street Journal. "You cannot protect the rule of law by violating the supreme law of the land."

The bipartisan bill, sponsored by Sens. Thom Tillis (R-NC), Lindsey Graham (R-SC), Chris Coons (D-DE) and Cory Booker (D-NJ), would mandate that the special counsel, currently investigating whether the Trump campaign colluded with Russia, can only be fired for “good cause.” That has some people wondering whether "it would unconstitutionally infringe on the president’s authority to fire executive-branch officials." The Atlantic quoted a few constitutional scholars who believe the special counsel bill goes too far.

Constitutional interpretation is not simply a matter of which side has the more persuasive argument or the nobler intentions. Realistically, the bill’s constitutionality, and thus its survival, comes down to votes—and not just those in Congress. Akhil Reed Amar, a constitutional scholar at Yale University, is among those who say Congress can’t limit the president’s firing power, because the Constitution vests all executive authority in the president. Mueller and other federal prosecutors are “inferior officers” under the Constitution, and therefore can be dismissed by a “superior” officer.

Hatch is under the same impression. He plans to vote against the "unconstitutional" bill.

But whatever the superficial attractiveness of an independent prosecutor, it is foreign to our system of government. The Constitution divides authority among three branches. The executive, legislative and judicial departments are meant to guard jealously their own prerogatives. Through this separation of powers, the American system assures that no branch may subvert the others. It ensures the long-term security of citizens’ rights and liberties by preventing any branch or individual from becoming too powerful.

The senator believes the investigation will ultimately vindicate Trump from any claims of Russian collusion and it is therefore in his best interest to let Mueller proceed. The Senate Judiciary Committee plans to take up the bill this week.