Barbara Bush Has Passed at Age 92 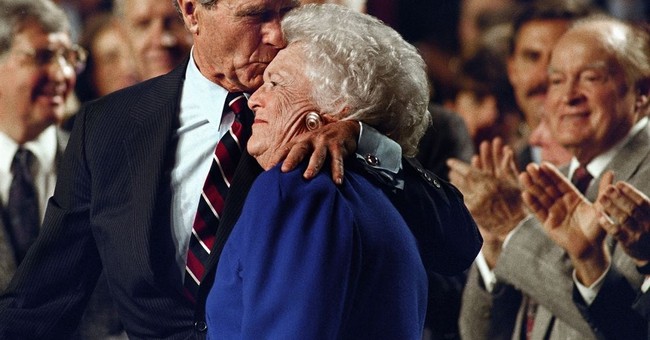 Statement by the Office of @GeorgeHWBush on the passing of Barbara Pierce Bush this evening at the age of 92. pic.twitter.com/c6JU0xy6Vc

Over the weekend, it was reported that Mrs. Bush had decided to stop seeking medical treatment and instead receive comfort care. For the past few years, she had dealt with congestive heart failure and chronic obstructive pulmonary disease.

Mrs. Bush was known for her quick wit. Even on her last days on Earth, she was cracking a few jokes and even having some bourbon.

A source close to the Bush family tells CBS News' Jenna Gibson that, while Mrs. Bush's COPD makes it difficult for her to breathe, she is alert and was having conversations last night. She was also having a bourbon.

Barbara and George met in Greenwich, Connecticut in 1941. Their romance lasted 70 years. Admirers shared beautiful photos of the couple throughout the years.

Statement of President George W. Bush on the passing of his mother: pic.twitter.com/CKDtnSdKg1

President Trump and other prominent national figures have begun sharing some sweet sentiments for the late first lady.

.@FLOTUS Melania and I join the Nation in celebrating the life of Barbara Bush: pic.twitter.com/4NzyjxqAFM

Barbara raised a family of service & character, stood by her beloved husband in the best & worst of times, and spoke her convictions with courage & passion. The great First Lady of our times. Ann and I will profoundly miss her friendship, her compassion, & the twinkle of her eye.

Barbara Bush holds a revered place in the hearts of generations of Americans. She so loved her family and our country. She led both with clarity and character. To Mrs. Bush’s family, I extend the deepest condolences of the whole House. May she rest in eternal peace. pic.twitter.com/Jy7zifU7gK