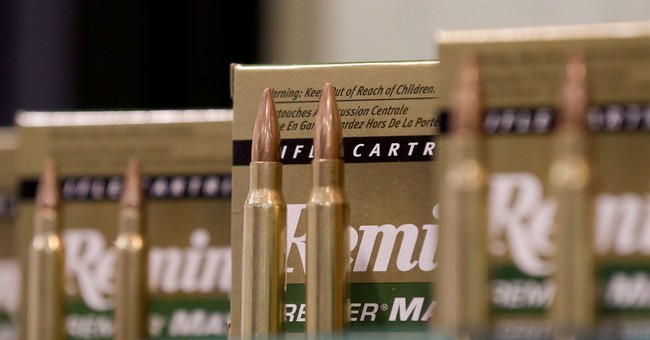 Families affected by the shooting at Sandy Hook Elementary school in December 2012 sued Remington for their advertising campaign they claim encouraged Adam Lanza to purchase an AR-15 and slaughter 20 children.

The lawsuit argues that Remington — along with a wholesaler and dealer, which were also named in the suit — erred by entrusting an untrained civilian public with a weapon designed for maximizing fatalities on the battlefield. It also asserts that the companies relied on advertising, with messages of combat dominance and slogans like “Consider your man card reissued,” that appealed specifically to disturbed young men like Adam Lanza, the 20-year-old gunman. (New York Times)

The gun manufacturer filed for bankruptcy last week, a move that will undoubtedly delay the lawsuit. The company has $950 million in debt after a drop in purchases since Trump's election. The New York Times surmises that gun owners have stopped flocking to buy guns because of the current administration's gun friendly policies.

Yet, the case, currently pending in the Connecticut Supreme Court, will be able to proceed once Remington figures out its finances, according to the plaintiff's lawyers.

In the weeks and months after the shooting, gun control advocates wanted another ban on the AR-15. New York Gov. Andrew Cuomo signed the SAFE Act, an unpopular piece of legislation that turned previous misdemeanors into felonies. In its first year of enforcement, the bill resulted in nearly 1,200 felonies for gun owners.

That's why 52 out of 62 counties in the state passed resolutions opposing it in 2013 and thousands of New Yorkers protested the bill in 2014 in Albany. One of the guest speakers at that impassioned rally included Donald Trump, then just a real estate mogul.