Dutch Lawyer Is the First to Be Sentenced in Mueller Probe 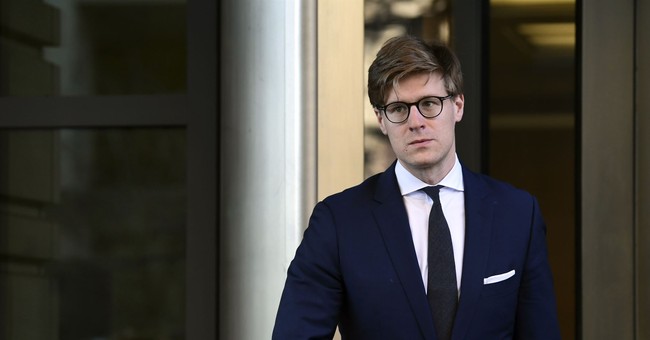 London lawyer Alex van der Zwaan is the first person to be sentenced in Robert Mueller's special counsel investigation into Russia's interference in the 2016 election. The 33-year-old Dutch national pled guilty in February to lying to investigators about his work in Ukraine with Trump campaign chairman Paul Manafort and deputy Rick Gates. Manafort and Gates were indicted earlier this year for money laundering and conspiracy against the United States.

JUST IN: The Dutch lawyer who lied to Mueller about his communications with a top Trump campaign official was just sentenced to 30 DAYS IN JAIL and must PAY A $20,000 FINE. Alex van der Zwaan is the first person sentenced in the sprawling Mueller investigation. (via @kpolantz)

Mueller, a former FBI director, took control of the Russia investigation back in May 2017. Since then, his team has handed out over 20 indictments, yet has no evidence as of yet to prove that the Trump campaign colluded with the Kremlin to defeat Hillary Clinton. In their biggest round of indictments, Mueller's team charged 13 Russian nationals with trying to sway the 2016 election by posing as grassroots activists and meeting with Trump campaign members. But, the investigators note that these campaign associates met with the nationals unaware of their true identities.

Trump has repeatedly called the investigation a "witch hunt," leading some in Washington to believe he is going to fire him. The president has insisted that is not the case.